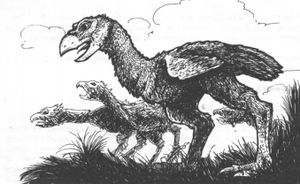 The Culchan is a species of huge, flightless carnivorous bird inhabiting the southern plains of the continent of Lustria. These grassland plains are named after the birds, and stretch from the temple-city of Oyxl to the southern-most tip of the continent.[1][3a]

Culchan are unusual looking birds, with strong legs and necks, parrot like heads, and beaks strong enough to crush a man's skull. Culchan reach up to nine feet in height. Plumage is normally brown, but male Culchan in good condition grow a set of colourful blue and red plumage. They are fierce creatures, but can be used as riding beasts if hand-reared, which makes their eggs and young highly valuable. Many of the Skinks who guard the ruins of Oyxl ride Culchan when on patrol.[1][2a] Amazons are also said to ride the birds into battle. [3a]

Culchan are also prized by primitive tribal creatures for their multicoloured plumes and their flesh, a delicacy to humans and Slann alike.[2a]