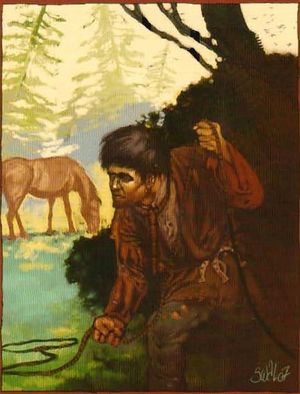 The Cult of Gunndred is the organised worship of the God Gunndred across the Old World. [1a]

Unlike those who follow Ranald, those who venerate Gunndred will not sneak into a house to steal but instead will turn up in force, torture and beat the inhabitants before taking their money and promising to return in a few months. Although they threaten to kill everyone if they speak of it, they actually hope they will do so as they often seek to gain a fearsome reputation. Some in the Border Princes and Tilea will pray to Ranald for protection from Gunndred. [1a]

Cultists in the Border Princes have recently been focussing on the cattle rustling element of the diety. Acting in groups of at least a dozen, they carry distinctive shields painted with a primitive cow skull and lasso and wear bright red cloaks. When they strike, they torture and kill any guards and any cowherds that resist but allow those who run to escape. From the Border Princes it has spread to Averland. [1a]

Historically there have been few large groups of cultists of Gunndred as they are usually crushed by the local authorities. The Border Princes have, however always been a stronghold with even some of the rulers being followers of the god. [1a]

Chiefs of the rustling bands are also his priests whilst the cult is headed by a Master Gunnslieb who ensures all others fear him. To join the cult is easy, just ask to join, endure a beating and you are a member. A given rustling band meets with the Master Gunnsleib four times a year to offer him spoils. [1a]