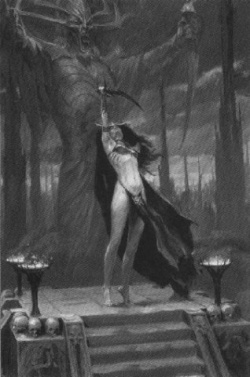 A Witch Elf, priestess of Khaine.

The centre of the cult, the great temple of Khaine, is located in Har Ganeth[1a], but all cities possess at least one temple[2], if not several. Villages, ships and Black Arks usually have a shrine.

The Witch Elves are the brides and priestesses of Khaine, Lord of Murder. Young Witch Elves are led by Hags who answer to older and wiser Death Hags[1b], who in turn are accountable to the extremely old Hag Queens [3a].

The Hag Queens obey Hellebron, leader of the cult of Khaine and thereby ruler of Har Ganeth[1c]. Hellebron's authority is unofficially challenged by Morathi who covertly holds the allegiance of several Witch Elves.

Below the Witch Elves come the Executioners[1a] and the Assassins.

The cult worships Khaine through the constant sacrifice of helpless victims, slain without mercy by the Witch Elves and the Executioners. These victims are usually prisoners of war or civilians captured in raids. They are usually High Elves, humans or Dwarfs but sometimes also Dark Elves.