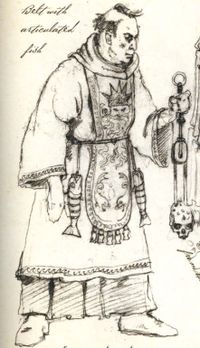 The Cult of Manann is the organised worship of the God Manann.

Manann is the God of Sea and Rivers, the son of Taal and like his father embodying a powerful force of nature. [1a]

The moon Mannsleib or Beloved of Manann is believed by the cult to influence the tides of the oceans. [1b]

Every dock in the Reikland has a shrine to the god. [1a]

Although there is a High or Arch Priest, there are very few Lectors or Arch Lectors, the individual Temples being allowed to govern themselves. Many of the clergy are ex-seamen and marines. Warrior Priests of the cult are often found on board imperial warships or patrolling river boats and also advise Admirals of the Empire. [1a]

Many smaller cults worship a specific aspect of Manann. [3a]

Many of these are sailors superstitions and individual priests decide which they favour. [1a]

Priests of the cult wear blue-grey or turquoise robes. [1a]