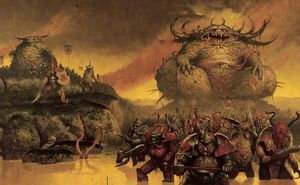 Nurgle and his Children

The Cult of Nurgle is the organised worship of the Chaos God Nurgle. [1a]

To embrace Nurgle is also to embrace your own doom, and to gain the Mark of Nurgle is to lose all fear of death, disease and mutation. To gain this favour, a follower must infect others with the disease/s that they carry and maintain their belief that Grandfather Nurgle will deliver them from all suffering. [1a]

Cultists of Nurgle often gather together, meeting secretly in filthy places to praise their god. Some last for many years, others only briefly before they fall victim to their own plagues but all are sure that they will be given a place within the garden of their god for their service. Cults vary greatly with some based around people of influence whilst others fest in slums, hospices or leper colonies. [1a]

They will act to spread the gifts of Nurgle, ensuring that vital amenities such as drains, midden heaps and sewers fall into disrepair. others infect food and water supplies or even just wander the streets spreading their diseases to any and all they meet. As cultists are often visibly affected by his blessings, they can be hard to conceal. [1a]

There are few allies for the Cult of Nurgle, even amongst the worshippers of the other Dark Gods but there are some dealings with the Skaven. [1a]

As a benevolent deity, Nurgle is quick to reward loyalty with disfiguring diseases, mutations and magical powers based around pestilence. Although only the most powerful of his champions will be able to ascend to become a Daemon Prince, all who become infected with Nurgle's Rot have the chance to become a Plaguebearer. [1a]

In 924 IC, the Order of the Septic Claw caused a great disaster in Altdorf by summoning Daemons of their god. [1a]

The most favoured of the servants of Nurgle recieve his Mark giving them immunity to pain, no matter how diseased or festing their flesh may become. Somewhere on their body three circular lesions will form a triangle, on occassion it is infested by maggots or weeps pus. [1a]