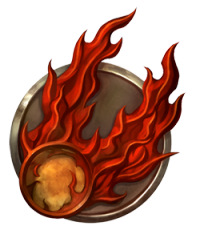 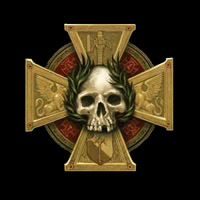 The Cult of Sigmar is the formal religious organization dedicated to the worship of Sigmar. It is the largest religion in The Empire.

It is now the foremost religion in the Empire and is inextricably intertwined with the political, cultural, and national identity of the Empire and its people. As a god, Sigmar is worshiped as a unifier of mankind, and a protector of the weak and innocent against the insidious threat of Chaos and dark magic.

There is some political conflict between the leaders of the Cults of Sigmar and Ulric - the northern god of winter, wolves, and war - but within the armies of the Empire followers of both cults are often found fighting side by side. Temples of Sigmar can be found throughout the Empire, with the largest, the Great Temple of Sigmar, located in Altdorf. Another temple of Sigmar is located in Black Fire Pass, the site where Sigmar made his historic pact with the Dwarfs and achieved his equally historic victory over the orcs.

Many faithful Sigmarites are deeply concerned with the role of the Sigmarite cult in politics. They feel that the political dimension of the Sigmar religion impairs their personal beliefs. Thus, they seek other ways to express their piety, abdicating personal goods and riches to live as eremites or beggar monks or sign up in the armies to spread their god's word. However, generals usually don't like to have religious zealots amongst their ranks, so these people often form their own war parties or even become Flagellants.

The Cult was established within the Empire in the years following Sigmar's abdication and disappearance with friar Johan Helstrum preaching that Sigmar had become divine, having seen a vision of Ulric placing a crown upon his head and annoiting him a god. Despite some opposition from the Cult of Ulric, the cult quickly grew into a fully-fledged religion, venerating Sigmar as the founder of The Empire.. Also known as the Sigmarite Church, the cult was officially organised in IC 73 by the first Grand Theogonist, the same Johann Helsturm. Over the next few centuries, the cult surpased that of Ulric in Reikland and Stirland[2a]

Around 1000 IC, During the reign of Ludwig II Hohenbach, a infamous glutton and sensualis the Cult saw an opportunity and invited him to many wonderful banquets, feasts and suppers even gifting him with a new palace in Altdorf with fine dining halls, kitchens and well appointed privies. Finally he granted the cult a Electorial vote. [1a]

In 1012, the cult had the Life of Sigmar published in eight volumes, each bound in Dwarf mined gold and these were paraded across the Empire. [1a]

The head of the Cult of Sigmar is the Grand Theogonist, who is assisted by two Arch Lectors of Sigmar, who act as the Grand Theogonist's surrogates, and each of these positions holds a vote in the Electoral Council to determine a new Emperor. One Arch-Lector is based in Nuln, the other in Talabheim. [1]