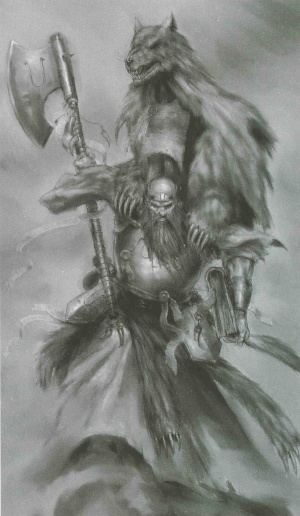 The Cult of the Ulric is the organised worship of Ulric, the God of Battle, Wolves and Winter in the pantheon of the Old World. [1a]

Worshipped by warriors and soldiers, his following is strongest in the north of the Empire, but his cult is found in other parts of the Old World.

Whilst most modern Ulricans believe that Sigmar is divine, a secretive sub-sect is believed to still preach that he was in fact a mortal hero thus belief in him is a heresy. [1a]

There is friction with the Cult of Sigmar, especially since the latter has three Electorial Votes rather than the one that the Ar-Ulric has. Some followers of Sigmar are suspicious of anyone who is not a dedicated follower of Sigmar but for the most part, the mistrust is limited and both cults are able to put their differences aside to work together. Tensiosn do come to a height during elections if one of the candidates is the Count of Middenland who the cult of Ulric normally supports. [1a]

With Ulric's accent on strength, honour and directness in battle, the followers of Ranald are regarded as underhanded and dishonourable. [1a][2a]

The first worshippers of Ulric are thought to be the Teutogens. [1a]

It was the High Priest of Ulric who crowned Sigmar, subsequently though for many centuries, the Cult refused to acknowledge that he had become a god. [1a][2a]

Ulric's holy days are the autumn equinox, the winter solstice, and spring equinox. Holy days are spent holding military parades with huge bonfires and feasting into the night.

There are many Ascetic Monasteries scattered around the northern empire and dedicated to hardening the body and soul through exposure to the elements, physical exertion, and combat training and mostly located in remote and barren places such as mountaintops and deep valleys. The ascetic Monks and Nuns of Ulric live as close to the wild as they can, hunting their own food as wolves would do. [2a]

Ulrican Priests, Monks, Nuns, and Warrior Priests are Wolf-born or referred to as The Wolf-born [name].’ More powerful priests claim the title Lord Wolf. [2a]

Initiates wear black robes with high necked collars, a silver wolfs-head medallion around their neck. The few females have scooped necklines and a high necked blouse beneath. When training, they usually strip to underclothes as skin is considered less valuable than robes and many have minor scars. [4a]

A priest wears much the same robes but made from better cloth and trimmed with fur and with a white wolf head decorating the chest. Some wear wolf pelts with high ranking priests embellished with silk and the eyes replaced with jewels. [4a]

Few Ulricans cut their hair prefering to emulate their god who is famous for his bushy beard and wild black hair. In times of war, they often braid their hair. [4a]

The Lore Haus is also the final authority on the canon law of the cult of Ulric,[2a] Ulric is a distant, harsh and unforgiving god, who expects his followers to stand on their own two feet, putting their faith in martial prowess. He praises courage, individual valour, and ferocity and despises weakness, cowardice, and trickery. [1a]

The symbol of Ulric is the wolf.

Ulric’s temples normally follow the same template: a square wall pierced by a single, reinforced gatehouse with a wolf ’s head emblem carved above the gate. This protects a fortified inner sanctum with functional buildings including workshops, cells, barracks, refectories, stables, and animal pens with the temple itself rises in the centre, its manned battlements surrounding a high dome. The temple interior is normally a single, windowless chamber, lit only by small apertures in the dome above and by a central, ever-burning fire that represents the Eternal Flame in Middenheim. Opposite the entrance, behind the sacred flame, is a grim statue of Ulric, sometimes sitting, often flanked by wolves. [2a]

Templars of the Cult