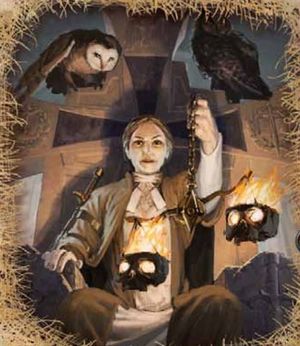 A Priestess of Verena

The Cult of Verena is the organised worship of the Goddess Verena.

Her cult appeals to an educated, upper-class, primarily urban minority being revered as a guardian of the laws that maintain privilege. [1c] Consequently she is popular among scholars, magistrates, law enforcers, artists, nobles, enlightened merchants, lesser and greater state officials, and wizards and sorcerers in particular. She is worshipped throughout the Old World, especially in university towns such as Altdorf and Nuln. Private shrines can also be found in homes of diplomats, academics, and administrators.

Although many amongst the illiterate masses have little interest in Verena, her cult sometimes organises missions to try and educate them. [1c]

The cult provides magistrates who travel on a circuits through outlying towns and villages, overseeing cases and passing judgement on minor crimes. Although some of these magistrates are more feared than respected, it is a matter of Verenean dogma that magistrates are always as even-handed and as fair as possible. Conversely this can make make enemies amongst the rich and powerful and in some places the judgement of Verena is held in higher regard among the common folk than judgements made by the more followers of Sigmar himself. [1e]

Books are considered holy and inviolable under Verenean doctrine, as the most important repository of knowledge, they should never be damaged or destroyed. Annotating them, provided the original text is not obscured, is allowed that is considered to add to the knowledge. Any tomes considered dangerous, for example corrupted by Chaos, it will be sent to a major library and placed in a vault there where only the most careful of scholars will be given access to it. [1e]

Friendly with most other cults of the Old World, the followers of Verena dislike the followers of Ranald, holding them to be little more than petty criminals. The cult of Ranald the Protector is tolerated, unlike his other aspects. As they consider all knowledge as sacred, and do not believe that any knowledge is inherently evil, this has caused issues with the cult of Sigmar. [1e]

Temples of Verena are able to communicate magically with each other and remain in constant contact. [3]

Members of the cult who break its strictures are, by Imperial law subject to the rules of the cult and obligated to endure any penalty that the cult imposes upon them. Any penalty or punishment the cult decrees is supported[1b] under law, and the individual will usually have no other recourse to justice, although like that of Myrmidia, the cult of Verena favour formal trials with pomp and circumstance.

During the Great War against Chaos Priests and Priestess of Verena wielded their swords alongside the spears of those of Myrmidia and the hammers of Ulric. [1a]

Most towns and cities of the Empire have a temple to the goddess, often part of any centre of learning. Smaller shrines can be found in public libraries, colleges, town halls and places of learning or bureaucracy. [1c]

Often considered humourless and uninterested in the small pleasures of life like simple human contact and a good gossip, the priests of the goddess are usually serious-minded and diligent students who hunger for knowledge and prize that above all else. As judges, some have gained a reputation for mercilessness and a predilection for the letter of the law. Verenean Priests are taught that if you lie this will make it much harder for you to recognise deceit from others. [1e]

On occasion the goddess may grant devout followers a vision which will usually include the notion of balance and if justice is not being done, especially by the cult itself. The dream of a hanged child could represent an innocent person facing false accusation whilst a broken sword may show that an injustice has been done. Her owl seen at night is usually a good omen but during the day can declare something is wrong. A jagged or dulled blade is also an indicator that the cult should be wary as injustice is at work. [1d]