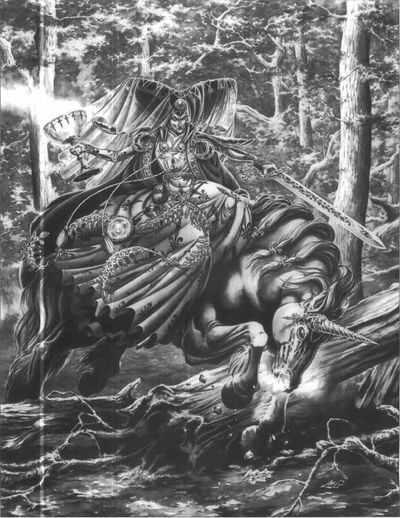 Sacred groves and areas of mystical power are The Lady's dwellings, and the Grail Knights are her protectors devoting themselves to upholding her honour. No base creatures or evildoers can profane her sacred places, and this is a duty that every knight in Bretonnia, not just the Grail Knight's, take very seriously indeed. The Bretonnia code of Chivalry is inextricably linked with the Lady of the Lake, as it is she who rewards honour and virtue, and the supreme sign of a knight's favour is to received her blessings. Throughout Bretonnia there are many Grail Chapels built upon sites of holy significance, ranging from humble road-side shrines to great fortress cathedrals incorporated into a knight's castle. It is the sacred duty of the Grail Knights to protect these shrines and often such knights will devote the remainder of their lives to defending the Lady's holy places. These knights are known as hermit knights and spend their lives living in and defending the shrines and relics housed within.

Some Bretonnian children are gifted with magic; one of the primary concerns of the cult is to collect all of them and to bring them to a undisclosed location for the security of Bretonnia and the children's own safety. Some of the girls eventually return later as priestesses of the Lady. No boys have ever return, becoming the Lady's personal retainers and servants instead.

Bretonnia is a patriarchal society which respects women but largely expects them to follow and obey their male family members. However the priestesses of the Lady are outside, above and beyond the rules of society. They usually act as advisers to the local Bretonnian nobles but if needed, have authority to issue orders and to be obeyed. They are even allowed to ride warhorses.