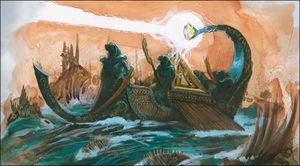 The Curse of Zandri is the mightiest war barque in the service of King Amanhotep. [1a]

Following the raid on Zandri by Captain Jaego Roth, King Amanhotep ordered the that the Curse be taken apart and the tombs robbed by the pirates built into the ship. [1a]

The ship has hundreds of Skeleton oarsmen and four huge statues of the gods that can propell it through the water with undying strength. Screaming Skull Catapults line its decks, at the prow is the Great Blade of Kharpesh and at the stern is the Jewel of the River Mortis which harnesses the power of the sun to fire beams of energy. [1a]