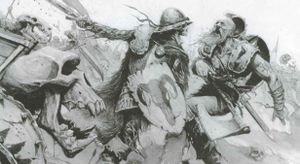 The Cursed Company is a group of Skeletons, led by Richter Kreugar the Damned. They are mercenaries that can be hired by anyone other than Bretonnians (their honour doesn't allow them to use any), Tomb Kings and Vampire Counts (see below).[1a]

The company is surrounded by many legends, making it hard to separate truth from fiction. What is known, however, is that it all started with Richter Kreugar, the young mercenary captain at the time, being hired by a powerful Necromancer to aid him in conquering the area of Wolfenburg.

The Imperial army sent to fight the Undead hordes suffered tremendous casualties; however, they kept pushing on, ensuring that the Necromancer couldn't regenerate his troops fast enough. When Richter saw him losing, he jumped ship, slaying the Necromancer as was agreed with an Imperial agent beforehand. Dying, Richter's former master still managed to curse him, and the young mercenary falling down as a heap of bones and armour. Next day, however, he rose from the ground, now as a skeleton.

And so Richter stalks the world, in the hope of finding battle that will claim his life (unlife, to be precise) forever. He offers his services to anyone who will accept, for as long as it is not undead, due to his hatred for them. The Necromancer's curse also has another effect: all enemies slain by Kreugar become Skeletons and serve him forever. It is those Skeletons that make up the ranks of the Cursed Company.

The Cursed Company can be hired by any army except Bretonnia, Tomb Kings and the Vampire Counts. They will never work for the Undead. [1a]