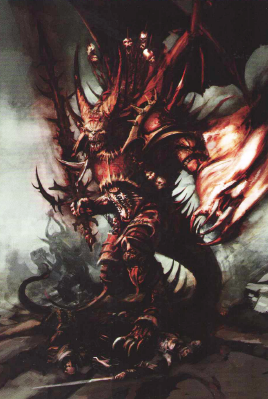 Daemon Princes are some of the most colossal servants of the Chaos Gods are hallowed with horrific powers and immortality amongst the Hordes of Chaos.

Every Daemon Prince was at one time a devoted servant of Chaos, whose activities in life have earned themselves blessings and elevation to daemonhood, the ultimate goal of every servant of Chaos.[2] From there Daemon Princes can decide to continue leading their companions within the mortal realm, living as a demi-god amongst their men,[4a] while others will leave their followers to reside within the Realm of Chaos, leading daemonic armies.[5] No matter what option they select, Daemon Princes are without doubt amongst the deadliest servants of the Chaos Gods, capable of crushing even the bravest of mortal champions.

Daemon Princes vary dramatically in size and appearance.[4a] These differences can be the results of many things such as their age and what Chaos God/s they worship. Their skills vary as well but while most are mighty warriors, wielding unholy weapons, others can be (or are also) powerful wizards, especially those who follow Tzeentch. Flight is another such variable gift which nsome, but not all, Daemon Princes have.[1] This gift is the most rarest to the Daemonic servants of Nurgle.

Weaker alternatives to Daemon Princes are known as Exalted Daemons.

Marks of the Gods

Aside from the "standard" Daemon Princes of Chaos Undivided, many followers of a particular god will be raised to daemonhood, gaining specific benefits as a result.

Those Princes not dedicated to Khorne may be powerful wizards. [4a]

They are known as the Dark Princelings, Deatbringers, Eternal Blasphemies. [4a]