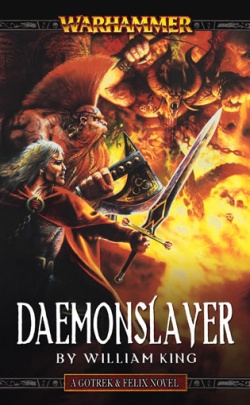 This article is about the novel by William King. For the Slayer type, see Dwarf Slayer.

Daemonslayer is the third novel in the popular Gotrek & Felix series by William King.

Gotrek Gurnisson and Felix Jaeger are drinking at an inn on the road to Middenheim when some thugs pick a fight with Gotrek. He easily dispatches them and, as the last attempts to flee, he is punched out by a newly arrived dwarf. The newcomer is Snorri Nosebiter, another Dwarf Slayer who has come to the inn with a second Dwarf, young Varek Varigsson, to meet Gotrek. After a drinking contest Gotrek and Snorri, who are old friends, learn from Varek that they have been summoned by his uncle, Borek Forkbeard, to join an expedition to Karag Dum, an ancient Dwarfhold lost during the last great Chaos incursion and now deep in the Chaos Wastes. Gotrek, Snorri and Borek were among the few survivors of a previous (unsuccessful) expedition to find the lost city that travelled in armoured wagons. Though believing that Borek must be mad to want to go back, Gotrek agrees to travel to his isolated base, the Lonely Tower, to hear him out, and Felix is forced to go with him.

On the road to the Tower, Varek informs the others that Borek established the base above an old mine and that some skaven had to be driven out of the tunnels first. That night their camp is attacked by skaven scouts that Gotrek and Snorri easily drive off.

Arriving at the Lonely Tower, Felix discovers that it is a large Dwarfen industrial hub in the bottom of a valley. He is unaware that Grey Seer Thanquol, who after his failure to conquer Nuln took his remaining skaven force to investigate tales of the skaven being driven out of the mines beneath the valley, is planning to take the settlement and steal the Dwarfen technology. Scared and infuriated by the arrival of the duo whom he considers his nemeses, Thanquol orders his forces to attack from both sides of the valley.

The resulting Battle of the Lonely Tower pits the disciplined Dwarfen engineers against Thanquol's ferocious skaven. Thanquol sends his new rat-ogre bodyguard, Boneripper (II), to kill Felix, resulting in a mad chase through the embattled settlement as Felix rides in the back of a cart driven by Varek who spooks the mules pulling it by hurling bombs into the battle. Felix eventually kills Boneripper by hurling a bomb at him, which the rat-orge swallows.

Despite heavy losses the dwarfs defeat the skaven. Felix is saved from a team of gutter-runners who survived the battle by Malakai Makaisson, a genius dwarfen engineer who took the Slayer Oath after the failures of two of his previous projects, a warship and an airship, led to many deaths. Gotrek, Felix and Snorri meet with Borek, Varek and Makaisson and the elderly Borek explains his plans for the expedition: a group of dwarfs led by him will fly over the Chaos Wastes in a large airship, the Spirit of Grungni, designed by Makaisson and built by the engineers of the Lonely Tower. The airship and its crew will be protected from the malignant affects of Chaos by potent spells. Their mission will be to find Karag Dum, enter it and recover two ancient weapons, the Hammer of Fate and the Runemaster's Axe, both lost with the city when it fell to Chaos over two hundred years ago, with only Borek and his brother Varig, Varek's father, escaping. Gotrek and Snorri agree to join the expedition and Felix, bound by his oath, is forced to go as well.

Gotrek, Felix, Snorri, Borek, Varek, Makaisson and a crew of dwarf engineers depart the Lonely Tower in the Spirit of Grungni. Unbeknownst to them Lurk Snitchtongue, one of Thanquol's skaven lackeys, has stowed away aboard the ship and is spying for Thanquol as they can communicate via a sorcerous mind-link. The airship's first stop is at Middenheim, where they take on supplies and two passengers: Ulrika Magdova, a Kislevite noblewoman acting as emissary for her people returning home to the north and Maximilian Schreiber, a powerful wizard who has dedicated his life to combating Chaos and is in charge of placing wards around the ship. Felix soon develops feelings for Ulrika which causes tension between him and Max, who also has feelings for Ulrika. He also befriends Snorri and Makaisson, the former respecting him for his position as Gotrek's rememberer and the latter bonding with him while teaching him how to fly the airship.

The airship arrives in Kislev at the mansion of Ivan Petrovich Straghov, march warden in charge of defending the northern border of civilised lands against marauders from the Chaos Wastes and Ulrika's father. Ivan has built a tower near his manse allowing the Spirit of Grungni to dock. The crew of the ship stay at his manse for a few days while Max puts the magical wards in place. Felix and Ulrika fall for each other and sleep together on Felix's last night at the manse. While Max and Ulrika remain behind at Ivan's manse the others continue on in the airship into the Chaos Wastes.

Passing over the Wastes the airship is damaged in a warp-storm and forced to halt while the crew repairs it. Caught on the surface of the ship's airbag during the storm Lurk begins to mutate, becoming much larger and stronger and developing horns, claws and a spiked tail. The ship anchors over a ruined city and Gotrek, Felix and Snorri descend to investigate only for the ship to be blown away, stranding them there. In a confrontation with a mad hermit they are teleported deep inside the city and forced to fight their way out past daemonettes and harpies. Reaching the surface they are approached by a huge army of beastmen, and only saved in the nick of time when the Spirit of Grungni returns and fires into the army, buying them time to climb up the ladder to safety.

Repaired, the airship arrives at Karag Dum only to find it surrounded by four Chaos armies, each dedicated to one of the dark powers. Utilizing a secret entrance Gotrek, Felix, Snorri and Varek sneak into the city and find it abandoned. Escaping several ambushes by wandering beastmen they are eventually found by the dwarfen survivors of Karag Dum, who are fighting a guerilla war against the servants of Chaos infesting their city. Their leader, Hargrim, eventually decides not to kill them and bring them to Thangrim Firebeard, the king of Karag Dum. The four are shocked to discover that due to the time-altering effects of Chaos only six months have passed since the city's fall for the defenders while over two hundred years have gone by in the world outside. On their way to see the King the group are attacked by Chaos hounds, who kill several of the rangers before Gotrek slaughters them with his axe, which has caused quite a stir among the dwarfs of Karag Dum.

Brought before Thangrim Firebeard the four learn that Gotrek's axe is in fact the Runemaster's Axe, taken from the city just before its fall and discovered by Gotrek in a cave in the Wastes after he became separated from Borek and Snorri during their return from their unsuccessful first expedition. The axe is also the subject of a prophecy, stating that when it returns to Karag Dum the creature that bedevils the city will shortly die. This creature is a Bloodthirster of Khorne, and it has sworn to kill King Firebeard and eat his heart before his dying eyes.

King Firebeard receives word that the Bloodthirster is approaching with an army of beastmen. The defenders of Karag Dum prepare to fight their last battle. Breaking through the concealing wards the Bloodthirster enters the throne-room. Wielding the Hammer of Fate King Thangrim confronts it but is overcome and the Bloodthirster rips out his heart and eats it as he dies. It strikes Snorri with its axe, badly wounding him and taking him out of the fight, before Gotrek steps up to confront it. Fighting for his life against beastmen Felix watches as Gotrek and the Bloodthirster battle. The greater daemon ultimately gets the upper hand despite being wounded several times and strikes Gotrek down. Felix manages to wield the fallen Hammer and hurls it at the daemon, wounding it badly just before Gotrek gets up and kills it with his axe. With the daemon banished the beastmen are demoralized and fall back, leaving barely a handful of dwarfs alive.

Felix, Varek, the badly-wounded Snorri and Gotrek, and the survivors of Karag Dum led by Hargrim escape the city and board the Spirit of Grungni with the Hammer of Fate. Despite their losses the recovery of the Hammer is a great feat and an elated Borek begins the journey out of the Wastes.