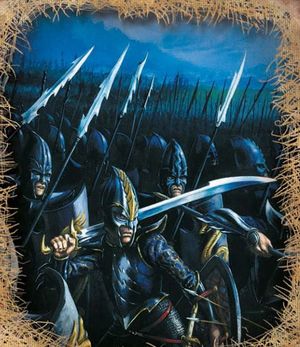 Dark Elf Warriors form the bulk of most Dark Elf armies, being composed mostly of civilian volunteers and conscripts. The Dark Elves are a warrior race descended from the noble people of Nagarythe, thus all Dark Elves possess a certain degree of martial skill. The Dark Elves are descendants of the brave warrior-folk that dwelt in Nagarythe during the reign of Aenarion. They are raised from birth as soldiers and raiders, learning early on in their lives that they have only that which they can take.[2a]

Though their natural mistrust and selfishness occasionally undermines discipline, Dark Elves make up for this with heartfelt bitterness and are united by their mutual loathing for all other creatures. The role of these warriors is to defend against enemy counter-attacks threatening the flanks of other formations, and to protect the army's war machines and missile troops. All Elves are swift, and Druchii spear regiments can march quickly to seize ground or respond to the enemy general's plan. These spear troops provide a solid cadre of soldiers that allows the more unstable warriors in the army to roam freely, slaughtering at will.[2a]

Regiments of Dark Elves are made up of both male and female warriors, drawn from the same city, and frequently the same extended family. Such formations are usually agreed upon not long before battle, with shifting politics and sudden promotions or executions making any kind of formal army structure impossible. Those Elves sworn to a particular lord or ruling house will fight under the banner of their masters, though this has been known to change over time, with some regiments may even shifting their loyalty during a battle. The commanders of the army only instill a semblance of control by appointing leadership of the regiments to lesser family members, usually younger siblings or bastard offspring with very little standing in the circles of power. [2a]

Armies of Dark Elves are normally raised by the lords of Naggaroth, in some cases by the Witch King himself and rarely without his leave; for a noble to gather large bodies of troops without Malekith's permission is to invite and incur his fatal suspicion. Those forces that are gathered with his blessing are normally for a specific attack, or to bolster the crew of a ship or ships for a particular raiding voyage. The Dark Elf fleets continuously sail across the world's oceans to loot the settlements of other races, stealing the treasure they can find and enslaving the inhabitants to be taken back to Naggaroth. The Witch King also requires huge numbers of Druchii soldiers for the ongoing war with the High Elves of Ulthuan. When fighting these most hated of foes, the Dark Elves are intent only upon wholesale destruction. [2a]