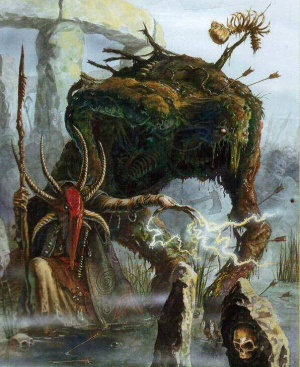 A Dark Emissary with a summoned Fenbeast

A Dark Emissary is a former Truthsayer, a sorcerer from the isle of Albion, that uses a specific strand of Chaos magic, granted to them by their lord and master, the Daemon Prince Be'lakor.

Like the pure Truthsayers they are able to create and control the Fenbeasts of Albion.

They travelled the Old World and lured power-hungry, greedy or evil armies to the mist-shrouded island, to help their Dark Master for thousands of years.[3a]

After the defeat of the Dark Master the Dark Emissaries became targets of the revenge from the Truthsayers as well as from their former allies, who felt misused and betrayed by them. Most fled the island of Albion and now roam the Warhammer world as Dogs of War, mercenaries who sell their service to the highest bidder. They will fight for the Hordes of Chaos and the warherds of the Beastmen as well as for Dark Elves, Vampire Counts, Skaven or Greenskins and even may be hired by some unscrupulous mercenary general or Elector Count from one of the Imperial provinces as well as the Dwarfs, Tomb Kings and Bretonnians. [2b]

Most notable places where they dwell now are in the Chaos Wastes. [2b]

They still seek revenge on the Truthsayers and to recover the places of power - the Ogham Circles from them. [2a]

A Dark Emissary knows several of the following spells: Betrayal of Death, Bolt of Dark light, Coils of the Serpent, Curse of the Dark Master,[2b] Elemental Power,[2c] Fog of Death and Nightmare. They use the Lore of Death or the Lore of Shadow. [2b][3a]

Their symbol is a spiral form, a feared and potent sign of dark and Chaotic magic.[2b]