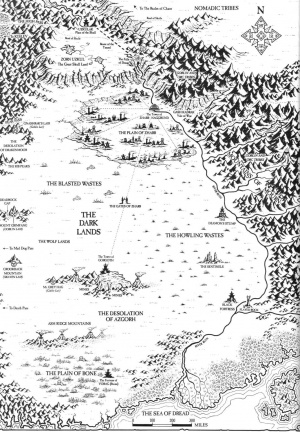 Map of the Dark Lands

The Dark Lands, sometimes known as the Great Skull Lands are a large stretch of land between the World's Edge Mountains and the Mountains of Mourn. East of the comparatively civilised Old World and west of the Oriental Empire of Cathay, the Dark lands are largely devoid of the settlements that mark the Old World and Cathay.

The Dark Lands border the Sea of Dread to the south, but ships rarely stop here, as the coast is wild and dangerous, and there are no established ports. The Dark Lands are inhabited by Beastmen, roving Greenskins - particularly Hobgoblins who have large territories in the Eastern Steppes to the east of the Dark Lands - and the Chaos Dwarf empire centred at Zharr Naggrund in the north of the region.

Much of the Dark Lands is a stark place where nature has rent the ground and burst the mountains apart. Amongst the peaks volcanoes spew black smoke into the sky. In the plains the stench of tar pits and oil pools hangs heavily in the air. Steaming lava from beneath the earth's crust covers the ash wastes with a blanket of bubbling magma. As a result it is almost impossible for anything to grow in these harsh and unforgiving conditions, the dim light and polluted air ensure that nothing except for a few thin black thorns can thrive there. The volcanoes and pits bring up all sorts of minerals and gems as well as sulphur, oil and tar - things that the Chaos Dwarfs long for above anything else. The south coast of the Dark Lands is covered in thick forest, the exception of the previous rule, as are the foothills of the World's Edge Mountains and the Mountains of Mourn. 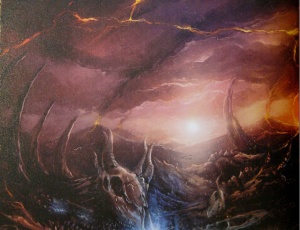