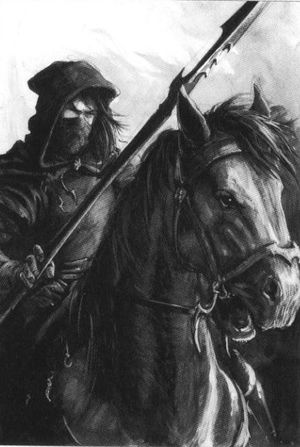 Dark Steeds are the carnivorous horses of Naggaroth. [1a]

When the armies of Nagarythe invaded the rest of Ulthuan, they captured many of the famous horses of Ellyrion. The finest of all Elven Steeds, these beasts were taken back to Anlec, and there they were bred with the native horses and corrupted with Dark Magic to turn them into black-flanked killers. No longer truly a horse, a Dark Steed can outrun the steeds of other races, galloping for days without tiring. When Malekith was cast of of Ulthuan by the Sundering, many of these steeds were slain, but a few were taken upon the Black Arks. [1a]

In the dark, chill forests of Naggarond, the Druchii made their slaves cut trees down to provide pastureland for their mounts, and flogged thousands of slaves to death to till the soil for food to give their prized creatures. The Dark Steeds fed upon the bones and flesh of fallen captives, so that dead slaves were as useful as living ones. However, no sooner had the number of Dark Steeds begun to flourish than the Cold Ones were discovered in the Underworld Sea and the nobles of Naggarond chose to abandon their old mounts in favour of the new bestial reptiles of the caves. These days, Dark Steeds are used almost exclusively by Dark Riders to patrol ahead of the army, and by heralds and messengers as they ride from city to city. [1a]