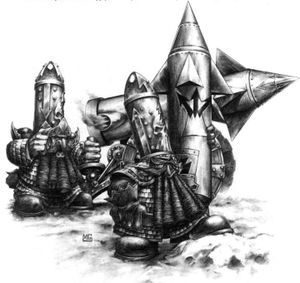 The Death Rocket are small war machines of the Chaos Dwarfs. [1a]

The deadly tubes are propelled by chemicals found in abundance on the Plain of Zhar and mixed in slave factories in which many die due to the toxic fumes and regular explosions. Much larger ricket batteries are used by the Chaos Dwarfs but the Death Rocket is a relatively small portable weapon, with the rocket about 7-8 ft in length. The warhead is unstable and often does not detonate immediately or indeed at all and even when it impacts in the target area it can crash tot eh ground and then spin around until its remaining propellent sends it spluttering in another direction. [1a]

A full complement of two crew is able to move it, but if is one is killed, its hard to move by the survivor. [1a]