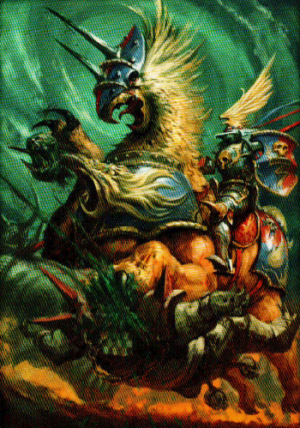 Demigryph Knights are amongst the most powerful heavily armored shock cavalry ever fielded within the armies of the Empire. Although the Knights themselves are expert cavalrymen, the mounts that these Knights ride are what truly distinguishes them in the heat of battle. These massive warbeast are ferocious and powerfully built, standing larger than any Imperial Warhorse and are far more bloodthirsty in their murderous assault than any other creature of such noble heritage. With a thick layer of armored plates overlapping over powerful sinews of muscular claws and a beak so powerful that it can dismember a fully-armored Knight in two, these Demigryphs are reserved for only the mightiest of Imperial Knights. Despite their fearsome reputation, Demigryph Knights are relatively rare, as the Beast themselves are far too few in numbers to mass-produce, and the breeding programs meant to supply the Empire with more have been met with grisly consequence. As such, the only way to tame such a beast is to go to the darkest reaches of the Reikwald Forest.

At the heart of this great Forest lurks many foul and ancient beast of many ages past. But none are so noble and majestic in their heritage as the prides of Demigryphs who ruthlessly claim this patch of territory as their own. Amongst a select few of the Knightly Order, an aspiring Knight's final quest is to capture and tame a mighty Demigryph and break it to his will. Unsurprisingly, many fail upon his task and are torn to bloody ribbons as a consequence. However, those that do managed to tame a Demigryph is given great praise, for not only has the Knight gained a mighty and loyal companion, but he has also given his Knightly Order even greater prestige in having such a beast within their arsenal. Such a reward comes at a heavy price, for a Knight would be scarred for all his life with the cuts and wounds inflicted by his own mount. However, these Knights wear the scars like a badge of honor, for they set themselves apart from their horse-mounted brethrens, bearing testament to their own personal bravery and martial ability. In turn, the Demigryph are forever loyal to their masters once they have earnt its trust, with tales abound of loyal Demigryphs stalking his prey to avenge the death of his fellow rider.

When the call to war is sounded, these Demigryph Knights would form into their own respected squadrons of heavy shock cavalry. When driven to a charge, their Demigryph would start its attack with a pounce on the enemy, which is then followed by a series of swift swipes from his muscular claws. Such an impact can cause the enemy to be crushed into the floor or be thrown many yards away. Unlike the common warhorse, a Demigryph does not attempt to overwhelm its prey by means of a great charge, but rely on its own brute strength and sheer size to take his prey down. With its monstrous endurance, a Demigryph would fight for hours, ferociously rendering flesh into scraps on the floor with claw and beak. With the close confines of such a battle and the sheer size of his Demigryph mount, the traditional cavalry lance is often replaced with a cavalry halberd to give them the ideal reach and power to crush his enemies.