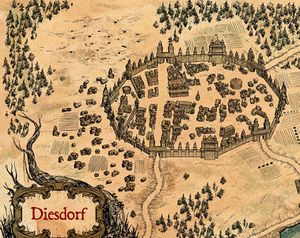 Diesdorf is a small town in the Reikland of the Empire. [1a]

It lies on river reik between Altdorf and Nuln [2a] with a population in the early 2500s of about 1600. [3a] It has become a popular place for badly wounded or infirm priests of Sigmar to move to for their remaining years. [3a]

Magnus the Pious famously made a powerful speech at the town and consequently it later became a pilgrimage site for Sigmarites and now boasts many shrines and temples to the god. [2a]

In 2440 IC, Emperor Wilhelm III created a military college in the town.[3a]

As well as the 120 members of the Watch, the town also has a 200 person milita and the 140 cadets of the Diesdorf Military College. [3a]

Emperor Karl Franz [1a] with the Baronet Diesdorf acting for him - usually a retired military officer, he act win conjunction with a Town Council. [3a]