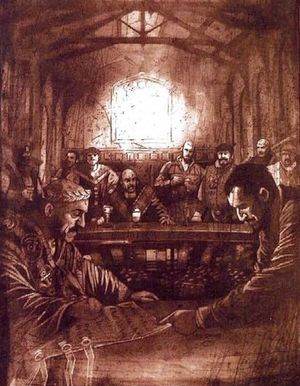 Dieter IV, the last Emperor of the von Krieglitz family to rule The Empire, was a corrupt, ineffective, and incompetent ruler. He disgraced himself and as a consequence was later deposed by the Electors.

Dieter was the grandson of Count Leopold von Krieglitz of Stirland, the preceding emperor. A vain ruler, he neglected the defence of The Empire, diverting funds from the Imperial military towards his extravagant building plans. His focus was the reconstruction of Nuln, the Imperial capital at the time, as a grandiose and beautiful metropolis. Nearly half of the city was demolished to create space for the Palace of Gold. [2]

During Waaagh! Grom, Dieter fled from Nuln refusing the calls for aid from the Dwarfs of Karak Varn and moved to Altdorf, where he displaced Wilhelm III. Nuln itself was sacked. [2]

In 2429 IC Dieter accepted a bribe from the Burgomeisters of Marienburg in exchange for the independence of The Wasteland. The ensuing scandal led to his deposition by the Electors, who appointed in his place Wilhelm III, Prince of Altdorf and Elector Count of the Reikland[1]. The disfranchised von Krieglitz family withdrew to Talabheim. Over time, the von Krieglitz family was able to regain a measure of its former power, its head being elected to the office of Grand Duke of Talabheim.

The Imperial Zoo is possibly his only useful legacy.