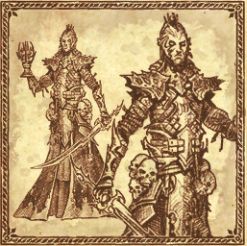 Disciples of Khaine were members of a small and elite cult dedicated to the God of Murder.

The devotees of this unique cult can trace their origins to the Dark Elf city of Clar Karond. According to legend, the Noble houses of this decadent city would offer members of their own families to the blood-slicked alters of Khaine in hopes of garnering their war god's favor before setting out to sea on raids. Some of these would-be victims were set aside to learn the arts of assassination, while others were singled out for enigmatic purposes known only to the Hag Queens of the Witch Elf temples.