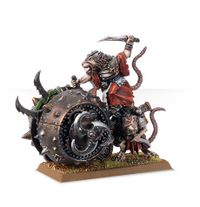 A Doom-Flayer is a skaven Clan Skryre warmachine used to accompany regiments as a Weapon Team. [1a]

It was first used against the Dwarfs of the Worlds Edge Mountains where a Warlock Engineer created an armoured attack machine that could survive the enemy fire and break through a dwarf shield wall. He used parts from a crashed Dwarf Gyrocoptor including its roto-engine to power the spinning, slashing and stabbing blades as it was pushed into battle by mostly skaven protected by its armour. [1a]

Although it and its successors were effective, it was improved upon by the addition of a warpstone generator which allowed it to plough into the enemy followed by skaven warriors and has been used successfully in various locations including against Dwarf Holds and in Nuln.[1a]