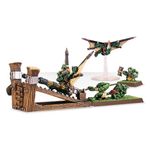 Doom Diver Catapults are similar to greenskin Rock Lobbers, except that instead of rocks they catapult goblins equipped with crude artificial wings.

The Doom Diver Catapult was originally designed for aerial reconnaissance. Unfortunately, the Goblins were too busy enjoying the exhilaration, speed and the chance to look down on Orcs to draw the position of enemy forces on the piece of slate they were all given. It soon became apparent that the Doom Diver Catapult was more effective as a weapon. It remains very popular with the more crazed or stupid Goblins and attracts a ridiculous number of volunteers.