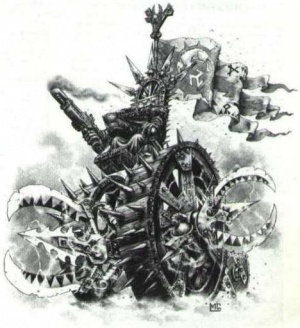 The Doomwheel is a large and massively powerful warmachine that is said to sum up the sheer inhuman ingenuity of the Skaven and most importantly the genius of Clan Skyre. [1b]

At first sight the Doomwheel might seem an oddity, perhaps even comical to opponents that have not faced one before. The Dwarfs, who have suffered many wars against the Skaven, know full well the Doomwheel's measure and will direct every war machine at their disposal to blast the deadly wheel apart before it can churn close enough to pulverise the Dwarf battlelines. Indeed, Dwarf cannons will allow themselves to be overrun by the foe, willingly sacrificing themselves for their hold, in order to get off a single shot at the infernal Skaven device.[1b]

The Doomwheel was invented by perhaps the most insanely talented of all Warlock Engineers – the mad genius Ikit Claw, the infamous Chiif Warlock of Clan Skryre. The Chief Warlock is obsessed with creating the ultimate killing machine, determined one day to outdo his predecessors who enjoyed the easy successes of warpfire throwers, jezzails, Screaming Bells and the rest. By harnessing the power of raw warpstone to create energy discharges, Ikit Claw has created a terrifying engine of destruction that rolls forward surrounded by a crackling halo of purple warp-lightning. Anything foolish enough to hold its ground before this infernal machine is blasted apart by the warp-lightning or crushed under the Doomwheel itself.[1b]

The design is so simple and yet so complex, so utterly Skaven in its inception that it is well beyond the keen of even the top minds of the Imperial School of Engineers in Nuln to comprehend. The giant rats scampering around inside the Doomwheel's enormous tread mills provide the primary motive power. This, in turn, sparks the warpstone generator, which, if all goes well, powers bolts of lethal warp lightning. If the green or purplish bolts that arc out from the warp-conduits do not slay the foe, then it will be up to the great iron-reinforced wheel to crush all who dare to stand before its creaking but mighty track. At the centre of the contraption sits a Warlock Engineer who pilots the mad creation. Sitting inside the mighty death-dealing artifice of destruction puffs the Warlock Engineer so full of bold reassurance that the otherwise dubious courage of his race is, at least partially, offset. Doubtlessly the wafting fumes from the warpstone generator bolster the Engineer's confidence as well. [1b]

It was first used in 2367 (Imperial Calender) where one was used to break through the gates of the city of Alcasta. [1a]

Within Skaven military tactics, the Doomwheel is the ultimate line-breaker. The rats inside the wheel are fed stimulant drugs before the battle and driven into an insane frenzy by the lightning flashing and sparking around them. As they tumble over each other the wheel rumbles forward, but the Doomwheel's speed is impossible to control accurately. Sometimes it will roll along more swiftly than a galloping horse, at other times it will virtually halt because the rats are temporarily exhausted. Though it can be said that the warpstone reactor is somewhat unstable and the speed generated by the rats is rather erratic a series of tests using slave-units as targets has yielded impressive results. Now the Clan Skryre Warlock Engineers are building this new wonder weapon as fast as possible.[1b]