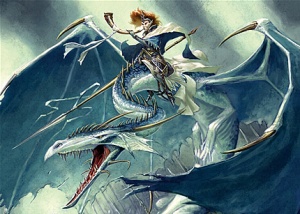 At the dawn of time a dying dragon would fly to the Plain of Bones to die.[1] This created a huge cemetery filled with skeletons of enormous proportions. With the Coming of Chaos some of the skeletons were re-animated as undead monsters - the Zombie Dragons and the disgusted dragons no longer go there.[18a]

It is said that some of the more powerful Dwarf runes required dragonfire to set them into the Gromril and some had even been en friends and allies in ancient times. They exchanged this aid for treasure, however, since the Dwarfs were betrayed they will no longer trust the Drakk. [20a]

There are several breeds of dragons, clearly shown by the colour of their scales (i.e.: skin). Each breed has its own kind of breath and help forge their nature. [19a]

In Ulthuan Dragons are further sorted by their age. Growing larger and larger throughout their life they keep on gaining in resistance and strength. The lifespan of dragons is unclear, but they live to be extremely old.[7a]