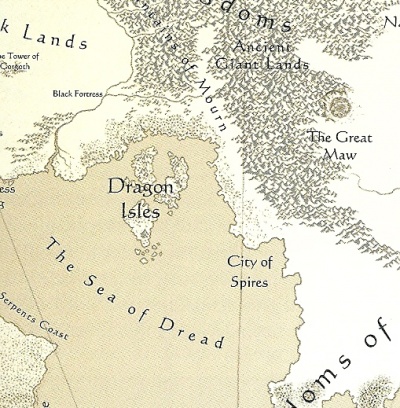 A map of the Dragon Isles and the surrounding area

The Dragon Isles are a group of islands located in the Sea of Dread, east of the Southlands and south of the Mountains of Mourn.[1]

The islands ave covered in deep dense jungle and swamp land with vast ancient trees whose canopy blocks out most of the sunlight with only shards filtering down to the snake infested morass below. Although it is rich in m inerals and gems - the large quanity of dangerous lizards and reptiles has meant that it remains unmapped with most of those venturing inland being quickly devoured. [4a]

The Dragon Isles are inhabited by Lizardmen Saurus and Skinks, although never by Slann.[2] Contact with their masters was cut off many centuries ago, and the Lizardmen on the islands have reverted to animalistic barbarism without the guidance of the Mage-Priests. It is unknown whether the Slann of Lustria have attempted to establish communications or left the Dragon Isles to their fate. However, as all attempts by explorers to establish colonies on the isles has failed, the fate of the Lizardmen living there has been accepted as part of the Old Ones Great Plan.[3]

A huge variety of reptiles populate the islands with large numbers of snakes, through vicious packs of Cold Ones through to Carnosaurs, Stegadon, Thunder Lizards and Great Wyrms and even the occassional Coatl. [4a]