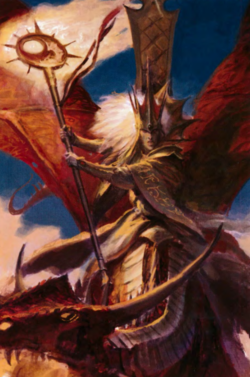 A Dragon Mage mounted atop his Dragon.

Dragon Mages are mighty Mages of the Kingdom of Caledor, Elves who have a sensitivity not only to magic, but also to the minds of slumbering Dragons. [1a]

Many nascent Dragon Mages only recognise their destiny when their sleep becomes haunted by dreams of fire and blood, in which they ride Dragons the colour of the setting sun. Such dreams mark the dying days of a mage's tutelage, for they herald an impetuousness that is ill-suited to the study of anything other than Fire Magic. When able, the Dragon Mage journeys to the sulphur-clogged caverns below the Dragon Spine Mountains of Caledor, there to awaken a slumbering Sun Dragon to serve as his steed. This is a process that normally takes months, or even years, yet a Dragon Mage can fully awaken a Dragon with but a whisper of its name. Thus begins a bond that lasts until either mount or rider is slain in Ulthuan's defense. [1a][2a]

The older Moon and Star Dragons do not normally respond to these young mages, requiring a more steady, clam mind to rouse them. [1a] Indeed where normally it may take months or a even as long as a year to fully awaken a slumbering dragon, a Dragon Mage can awaken his or her bonded dragon with the mere whisper of its name. [2a]