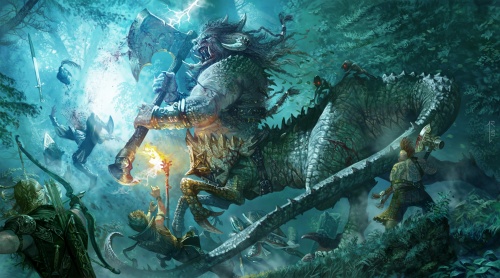 "Shaggoth!" cried one of Malekith's soldiers, and the prince knew it to be true. The oldest legends of the dragons spoke of such creatures, but Malekith had considered them to be myths from before the rise of the elves; before even the coming of the Old Ones and the banishment of the elven gods. Cousins to the dragons who had ruled the world before the coming of the gods, the shaggoths had bartered their souls to Chaos long before the Dark Gods had arisen to claim this world. If the dragons were to be believed, they had warred with the shaggoths for an eternity until finally the dragons had triumphed and driven their foes into hiding.[1]

Dragon Ogres are primeval, monstrous creatures aligned with the dark powers of Chaos. They are strongly associated with thunderstorms. [5a]

The Shaggoth Tirsoknaia told his pupil that the Dragon Ogres perceive reality as a dream and their dreams as reality, with the people of the world mere figments of their imagination. [6a]

Dragon Ogres have been made infertile by the very lighting that fuels their immortality. [6a]

Dragon Ogres possess a humanoid upper body with a horned head and the scaly lower body of a dragon, including four legs. Dragon Ogres are an ancient race whose origins lie in the distant past before the arrival of the Old Ones. Long before Elves had developed writing, or humans had learned how to make fire, the Dragon Ogres were on the verge of extinction. During the Coming of Chaos, the eldest of their race made a pact with the Chaos Gods. The Dragon Ogres were granted immortality, but were eternally damned and bound to serve the Dark Gods.

In a similar manner to Dragons, Dragon Ogres spend most of their time sleeping in the mountains or the Chaos Wastes, and it often takes a powerful thunderstorm to wake them. In addition, they are known to bathe in lightning to extend their life and increase their vigour, and so are strongly resistant to lightning-based attacks such as blasts from the Warp Lightning Cannons of the Skaven.[2] Riding to war, Dragon Ogres often carry weapons and armour, and possess the strength of a Troll combined with the speed of a cavalry unit.

Dragon Ogres are quite distinct from the race of Ogres. In fact when the two races first encountered each other in c. -2400 IC they became instant enemies. Great battles were fought between the Ogres and Dragon Ogres for control of the Mountains of Mourn, with the Dragon Ogres eventually being driven into the north by the Ogres.[3]

Some wizards have tried to bind Dragon Ogres to their service but quickly found that they are almost immune to magical constraints of this kind due to their link with the Chaos gods. However a cabal did discover that they could use lightning itself to bind them in a bloodlust-filled frenzy - although any mistakes in the incantations result in a swift and brutal demise. [4a]

Shaggoths are the oldest and largest of the Dragon Ogres. It was these self-same creatures that made their dark pact with the Chaos Gods eons ago. Only the loudest and fiercest of thunderstorms can wake a Shaggoth from his slumber in the mountains. Provided they continue to bathe in lightning, Dragon Ogres continue to grow in size and power throughout their lives. There is no real limit to how massive one can become.[2][5a]

Older than the Elves, the elder Shaggoths reach titantic size and Krakanrok the Black is said to be the size of a mountain. Despite their pact with the Dark Gods, they will not fight for Daemons, seeking to preserve what is left of their souls. [5a]