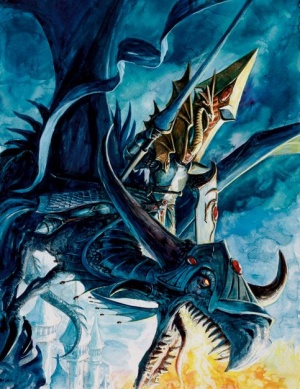 A Dragon Prince atop his ferocious mount.

The Dragon Princes of Caledor now form an elite body of heavy cavalry for the High Elf army.[1a]

In former times numerous Dragons lived in the Dragon Spine Mountains. Caledor Dragontamer, the founder of the realm of Caledor, managed to gain their trust and the local princes were able to ride mighty dragons into battle. Their past is still remembered and honoured, and the Dragon Princes are the only force which will not lower their banner as a sign of respect to the Phoenix King [2a] a honour they claim was given to them by Caledor I, although other point out they did not lower it even before his decree. [4a]

During the War of the Beard, A Dragon Prince rode to battle on a Drake, a young Dragon rather than a Elven Steed. [6a]

Today the Dragons are much reduced in number, and most of the time they sleep and dream. It is very difficult to wake them - not to mention dangerous, as they are quite temperamental beasts. As a result, the majority of local princes today ride heavy warhorses. Albeit a pale shadow of former glories, they are still a powerful force to reckon with. They rank amongst the finest cavalry in the Warhammer world, crashing into the enemy, slaughtering their foes with masterful strikes from both lance and sword alike. [1a] Such is their skill that a Dragon Prince can slay two warriors with only one lance thrust, impaling both on their steel-tipped weapon. [4a]

Loremasters speak of a final battle when the Princes will ride to war on their Dragons, as in days of old. [3a]

Their Ithilmar armour is modelled after the Dragon lords of ancient days. [2b]