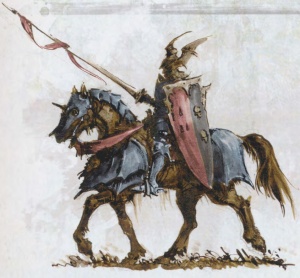 The Drakenhof Templars were an order of Blood Knights belonging to the Von Carstein dynasty.[1]

The original Drakenhof Templars were a genuine knightly order. Founded long before Otto von Drak was usurped by Vlad von Carstein, they had the noble goal of driving the darkness out of Sylvania. Needless to say, they failed, and Konrad von Carstein tore the last grand master apart hundreds of years ago. Becoming a group of fearsome Blood Knights, there would be several iterations of the order, for Vlad and his heirs were ever imitators of human tradition. Over the years the order became infamous for their prowess, considered among the mightiest order of Blood Knights, second only to the legendary Blood Dragons themselves.[1]

When Vlad was resurrected by Nagash during the End Times most of the Order abandoned the current Sylvanian count Mannfred von Carstein and returned to Vlad, helping him legitimize his claim over Sylvania once again. They served Vlad during his campaign in the north to covertly help the Imperial forces hold the Auric Bastion against the Chaos hordes. After the collapse of the Bastion they rode with him to fight to lift the siege at Altdorf and later rode with him to the defense of Averheim, though due to the hesitation of Nagash and the other Mortarchs they arrived too late.[1]

After constant combat for several years during the End Times the majority of the order was destroyed. The last few members were either destroyed in the defense of the Dead and Buried inn against Nurgle daemons or sent by Vlad to Bretonnia to escort Duke Jerrod when he and his knights left Athel Loren.[1]

The bodyguard that fought with Arkhan at La Maisontaal was composed entirely of vampires Mannfred did not consider worthy of the von Carstein name.[1]

Only one brotherhood of templars had accompanied Arkhan the Black. The rest of the vampire knights – four brotherhoods in all – followed Mannfred south beneath the Drakenhof banner. Though Mannfred would never have admitted it, he was greatly reliant on the Drakenhof Templars in the battle beneath Mad Dog Pass, as they were the only troops he could rely on to act autonomously – all others were slaved to his will.[1]

A once-great order of knights, the Drakenhof Templars' numbers had been greatly thinned since Nagash's return. Loyal to all vampires of the von Carstein line, they had many times been pressed into battle by Vlad and Mannfred, and they were given the most dangerous and difficult missions simply because no other body of troops could be trusted to see them through. All in all, this had taken a heavy toll on the knights of Drakenhof. The handful of templars who had arrived at the Dead and Buried with Vlad were the largest formation that remained.[1]

Grand Masters of the Drakenhof Templars