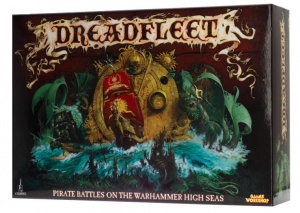 Dreadfleet is a standalone board game released by Games Workshop set in the Warhammer Fantasy world. Players take control of one of two fleets in order to make war on the high seas of the Galleon's Graveyard. Dreadfleet was produced in limited numbers and released in October 2011. The box was self containted and included all the rules, models, scenery and terrain necessary to play.

The contents of the box included