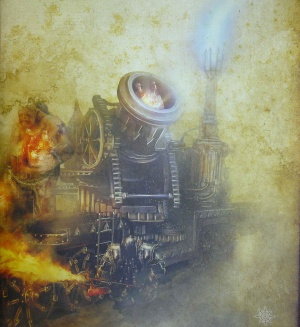 The Dreadquake Mortar is an extremely powerful siege weapon of the Chaos Dwarfs. Its shells are powerful enough to literally rend earth, causing damage not unlike that of a tremor. Understandably, the best fortifications don't stand much of a chance against this kind of damage. [1a]

A side effect of firing projectiles of such power is a high risk of misfire, making use of gunpowder suicidal. Instead, the cannon is steam-driven; the build-up of steam in a pressure vessel easily rivals that of blackpowder smoke, but can be trusted not to go astray. The right amount of steam cannot be generated instantly, though and the sheer size of its projectiles make it very slow to reload. To counter this, Chaos Dwarfs often assign slave Ogres to those warmachines, both to help protect the priced siege engine and to ensure it fires on time. [1a]

Sometimes the circumstances demand that the mortar be quickly relocated, whether to quickly bust an enemy strongpoint or to prevent its capture by the enemy forces. That is why some mortars are mounted on the Steam Carriages, their smoke-belching transport giving them mobility envied by other war machines.

The creation of the shells are a secret kept by the servants of Hashut and when they explode they do so with a blnding red light. [1a]