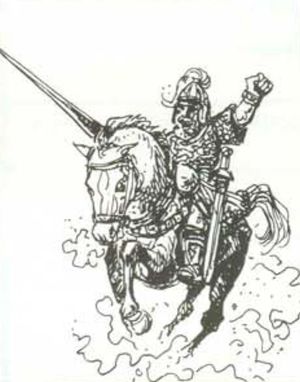 The Druzhina are the lowest rank of hereditary nobles in the nation of Kislev.

During times of war these nobles form their own regiments in a Kislevite army, and they look most impressive with their ancient armour and weapons, as most of these prized artefacts are handed down from father to son. Druzhina are rich enough to afford their own horses and weapons, as they are obliged to fight for the Tzar when needed. As payment for this obligation Druzhina are allowed to control their own land and pay less on their annual taxes.[1]

The rank of Druzhina is often given to common Gospodar and Ungol folk as a reward for their service. Those given this rank in this fashion are given the title for their life, but it is not passed to their sons.[2]

Some find their way into the west as mercenaries where they increasingly resemble the knights of those nations. [4]