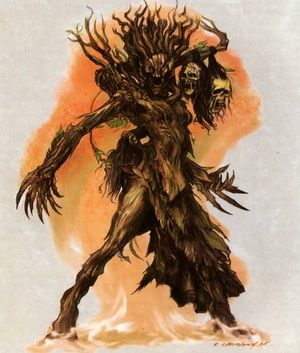 A Dryad of Athel Loren.

Dryads were a type of Forest Spirit that inhabited the ancient forests of Athel Loren, long before the arrival of the Wood Elves.

Dryads are spiteful creatures with hearts akin to shards of ice. In the soul of a Dryad, there is neither room nor regard for compassion or mercy, merely an uncompromising dedication to Athel Loren that makes even the most heartfelt vows of Elf or Man seem trivial by comparison. To harm the forest is to invoke a deadly and unyielding vengeance that ends only when the transgressor’s body has been ruined and broken. Only a fool deliberately offers insult to a Dryad, but alas, these spirit-maids are so utterly different to mortal creatures that offence is often taken whether it was intended or not.[2][3a]

Few mortals make such a mistake twice, and then only if the individual in question is either very lucky or very swift. Dryads are able to shape-shift into different forms and often mimic the appearance of Elves. On such occasions, they appear as unearthly, lithe and beautiful maidens — albeit with a greenish hue to their skin and twigs in their long, cascading hair. It is in this form that the Dryads walk the bounds of Athel Loren. They are not choosy in their victims, preying on tree-killers, invaders and lost innocents with equal malice. The only sensible course of action when approached by such a creature is to flee as far and as fast as possible, but most potential victims find themselves enraptured by the Dryad’s comely form or beguiled by the haunting melodies of her otherworldly song.[2][3a]

Before long, the victim is sufficiently addled that he will do anything that the spirit desires, and so is swiftly enticed into the shadowy depths of the forest. Only when the hapless prey is completely under her spell, his mind lost in a cloud of desire and promise, does the Dryad strike. Sloughing off her beauteous form she transforms into a war aspect, the hatred and spite within her soul remaking her outer appearance into a thing of horror. Her hair becomes a twisted mass of thorns, briars and twigs, her face distorts into a terrifying and savage visage, her limbs turn long and wood-like, and her fingers become vicious talons capable of rending and impaling her prey. Before the victim has even registered his predicament, his blood is spilt upon the hungry ground of the forest and his body ripped limb from limb with implacable savagery.[2][3a]

When Athel Loren takes the field of battle, the Dryads assume their war aspect and hunt upon the flanks of the army. Their lithe and swift nature allows them to cover great distance at speed, falling with ease upon a foe who, until moments before, thought themselves entirely safe from harm. Indeed, a surprise attack by hissing and darting Dryads is oftentimes the first tangible warning an enemy army has that Athel Loren marches against it. That, or their general disappearing from camp in the still watches of the night, only to be found shredded and lifeless in a nearby glade at dawn the next day. Dryads are not known for their mercy.[2][3a]

Dryads are able to dwell inside trees or assume the form of trees by magical shape-shifting. Dryads only assume tree aspects when in hand-to-hand combat.[1]