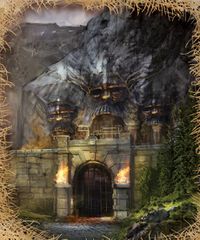 Entrance to a Dwarf Hold

Dwarfen civilization revolves around the inhabitation of well-protected fortress settlements known as Holds (Karak in Khazalid) which are centered in a system of halls, chambers, and defensive barriers within the interior of a mountain. Within these holds, the Dwarfs are able to successfully mine potentially vast amounts of rare and precious metals and gems held deep in the Earth's crust, with relatively low risk of theft. The holds also allow the Dwarfs to protect the veins and deposits they have laid claim to using their own defensive tunnel and trap systems.[2]

Each of the Holds is ruled by a single Dwarf King who owes fealty to the High King of the Dwarfs, the Lord of Karaz-A-Karak (currently, Thorgrim Grudgebearer), and is obligated by sacred and utterly inviolable Oaths to answer the High King's muster of the entirety of Dwarfen civilization, should it be deemed necessary (as was called for during the Storm of Chaos).

Many Holds have fallen to skaven and greenskins since the end of the Golden Age of the Dwarfs, and some to fouler things still. Yet many of the mightiest holds that have ever existed still stand strong, prosper in trade with allied nations, and some even manage to eke out a stable population net growth - contrary to the idea that the Dwarfs are a doomed race in the manner of the High Elves.

Additionally, new holds are often founded or reclaimed by expeditions of fortune-seekers led by a noble whose Clan can make a claim of rulership to an abandoned hold - providing they can survive the inevitable war with the malicious squatter races that invade such places [3] (skaven, orcs, and goblins are the most hated of all the enemies of the Dwarfs for precisely this reason).

The most freshly built (in relative terms - mere centuries old) of the newest generation of holds are generally little more than stout surface redoubts which are built over major ore veins - settlements that are generally abandoned before becoming true Dwarf Holds for economic reasons. Some of these new holds such as Karak Hirn and Karak Badul, however, manage to find spots to found on within strong natural defensive terrain that rests on top of huge gem and rare metal deposits - allowing these new holds to attract wandering Dwarf Clans to help populate it, materiel for crafting and trade, and especially the benefit of drawing younger, less conservative Dwarfs to operate the local Engineer's Guild - a phenomenon that has seen the introduction and eventual acceptance of war machines such as the Organ Gun, Flame Cannon, Gyrocopter, and Firedrake gun despite the grumbling of Longbeards across the Kingdoms. Alternatively, the best Runesmiths, shieldcrafters, armsmiths, and other fine Dwarf artisans are universally acknowledged to be products of the ancient, "old" holds from before the end of the Golden Age.

Anatomy of a Hold

Dwarfs and the Surface

Though the Dwarfs live much of their lives beneath the earth's surface, and the greater part of a hold's realm is beneath the surface of mountains and rock, Dwarfs do not fear the surface. Indeed as much as one-third of a king's domain may be above ground and far afield from his royal chambers at the heart of a fortified mountain city [1].

Surface structures include not only gates and gatehouses into the hold proper, but also a network of other delvings that may only be connected to the interior of the mountain by overground routes. These incorporate "all manner of mines, lookout towers, goat-herding stations, trading posts, breweries, farms, gyrocopter landing stages, and Ranger outposts."[1]

The most obvious outwardly visible indications of a Dwarf hold are the bastions and skybridges that crisscross the upper reaches of mountains which the Hold is built into. Bridges, towers, turrets, and walls are patrolled at all times of the night and day by the stalwart warriors of the city. Warnings are sent from one edge of the realm to the other by using bonfire signals, and troops or artillery can be swiftly and invisibly redeployed from one outpost or way station to another via reinforced trenches or tunnels.[9a]

Within the hold proper exist a series of descending levels called "deeps". These deeps are usually linked by long stairways, subterranean tunnels, and shafts - lit up to a surprisingly bright degree either by large braziers, or by cunningly crafted luminary shafts filled with reflective angles and reaching up from a deep to a discrete air intake point on the mountain surface. [2][3] The walls of the deeps themselves are expertly crafted and adored with Dwarfen mosaics and runic insignia.

The lowest deeps, sometimes miles beneath the ground hold safe the tombs of the ancestors, the Hall of Remembering which houses the Book of Grudges and the Hall of Deeds which records the victories of the Hold. This area also is home to the Temples to the Dwarf Ancestor Gods. [9a]

The Underdeep is where current or formerly active mining operations take place. In older holds (particularly those connected to the once-famous Underway linking all the greatest of the ancient Dwarf cities), the Underdeep is a dangerous and abandoned place where skaven and goblins are known to lurk, and where the Ironbreakers and Firedrakes are forced to fight their bloody wars to defend their home from the greed and hate of lesser creatures.[4]