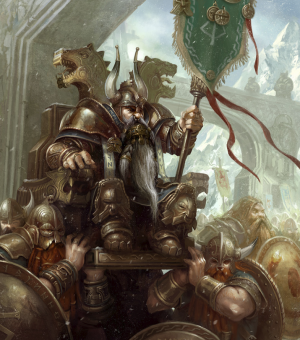 Dwarf Kings are the rulers and leaders of a dwarf-hold. [1b]

Every major hold has a king, while smaller settlements may be led by a Lord or Thane. The kingship usually passes from the king to his eldest son upon his death.

The king rules his hold with the help of a Council of Elders. The council is made up of the oldest, wisest and most honourable dwarves in a hold and, accordingly, commands great respect. The king and his council will often debate an important issue, but the king always has the last say. The King of a hold is often surrounded by his elite Hammerer bodyguard.

At any one time there will be a single High King of the Dwarfs, and this has traditionally been the King of Karaz-a-Karak. Nominally, the High King commands the allegiance of all the other kings, however, practically, dwarves are proud individuals and not given to blind obedience.

Very rarely, there have been examples of dwarf queens, however a queen normally only has power until a suitable husband can be found. The next king is chosen from the queen's clan, not her husband's. [1a]

Should the King of a Hold go to war he might lead an army composed of warriors from his own clan, equipped with the best wargear the hold can supply and even mercenaries. [2a]

In a hold, most of the territory is owned by the King who leases it to other Dwarfs, clans and guilds generating income for the Royal clan although in addition they also tax the guilds themselves as well as doweries and many other elements. King Thagar Goldhoarder even tried to instigate a Beer tax but this lead to an unprecedented strike by all the Dwarfs of the hold made him reluctantly relent. [1b]