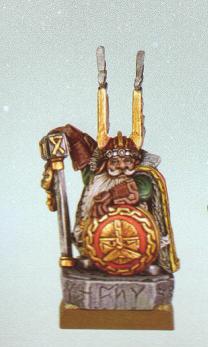 Dwarf Lords are wise, old and powerful Dwarfs who often lead Throngs into battle. Lords are of royal blood, members of the clan of the King of the Hold.

Lords commonly bear into battle runic weapons, armour and talismans forged for them by the craft of the Runesmiths. They have gained a vast amount of experience in combat over hundreds of years. They are taught by both their elders and the Runesmiths and when the time comes for them to take command of an army for the first time they will have already been tested many times.

Lords are sometimes borne into battle on a large shield, which is carried by two strong and loyal retainers, called Shieldbearers.

A Dwarf Lord is amongst the strongest and most powerful individuals within a Dwarf army, having been promoted as supreme commander for being a magnificent leader, an extraordinary tactician, and having one of the longest beards within the entire army. These fell-handed warriors are equipped with the finest arms and armor within his clan, whom have been known to fight at the forefront of the army, inspiring his comrades in the face of overwhelming odds. As a rule, Dwarf Lords are a grim sort, for they are the leaders of a dour people. Upon their broad shoulders is carried the weight of untold debt, the inherited grudges of a long-suffering and unforgiving race. It is their duty to avenge all wrongdoings to their clan, their hold, and their entire race, not just in the present, but also for all time.

Every Dwarf Lord started out as a Thane, whom are the patriarchs of a Dwarf Clan. For a Thane to progress and become a Dwarf Lord, he must be well tutored in the ways of their ancient foes, absorb a great wealth of wisdom, and be a bearer of royal blood. Such wisdom includes being a master of tactics and strategy, learning to wield the armored might of their throngs as well as they wield an axe and shield. All Dwarfs take great pride in their possessions, but none more so than the ruling class. Not only is a Dwarf Lord a potential candidate as the next King of a Karak since he is a bearer of royal blood, he is also, depending upon wealth or clan, be equipped with some of the mightiest runic weapons and armor around. It is an honor amongst the Dwarfs to bear such relics of war into battle, for each item is passed down from their forefathers, an ancient legacy in its own right. Covered in runes and bristling with arcane might, each of the Dwarf Hold's relics have a long history of great deeds and great feats.

When a Dwarf Lord leads his Throng into battle, the Lord is often situated within the very center of the army, where he is surrounded by an entire retinue of Hammerer Bodyguards. It is here where the Dwarf Lord is to take command and direct his army as he would direct the blow of an axe. Should it be needed, a Dwarf Lord would personally march towards the frontline and fight alongside his kinsmen, inspiring those around him with great vigor that could possibly be enough to win even the most hard-fought battles. A strong and powerful individual, a Dwarf Lord is the personification of a truly magnificent leader.