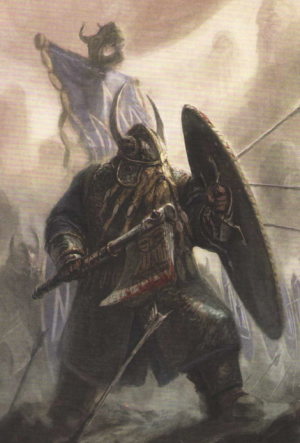 Dwarf Warriors are the most common front-line infantry of the holds, and form the overall bulk of most Dwarf armies. In times of war, the leaders of the clan call the muster of any Dwarfs old enough to fight to form together into regiments. Most of the individuals that will answer the call to arms are craftsmen of some sort - stone-carvers, brewers, minters, and the like. But once they don their well-forged mail, put on their steel helm and heft an axe in hand, they leave behind the artisan, turning that same industrious nature to their other calling - warfare.[1]

Dwarfs make formidable fighters -- they are strong and extremely resilient, broad of shoulders and wide of girth. Although they are by no means quick, they are physically robust and can maintain a steady plodding pace, marching for days on end despite being loaded down by burdens and heavy mail. When they charge into battle, the momentum generated by their wide, armor-clad bodies is remarkable, hitting the foe with resounding force. They have broken many enemy battle lines this way, splintering Elven phalanxes, carving through Orc formations and hacking apart the great masses of Skaven that make up their verminous armies.[1]

Any foe that has fought Dwarfs has quickly learned to respect them - even the elite troops of other armies have met their match against these warriors. They are grim and determined fighters, unwilling to retreat and able to advance and battle on even in the face of great adversity. Tales abound of Dwarfs - hopelessly outnumbered, backed into unfavourable ground and pressed on all sides - somehow emerging triumphant.[1]

Protected by their heavy mail, their skilful use of overlapping shield walls and, finally, by their own tough and obstinate nature, Dwarf individuals, units and armies as a whole seem able to absorb punishing blows that would cause other races to break and flee. With Dwarfs, such suffering only serves to make them angrier - and with beards bristling and hands clenched around axe hafts and mighty warhammers, the Dwarfs regroup to charge anew. Their feeble-limbed foes, too worn out and tired at the end to even lift their weapons, are slaughtered, save for those fast enough to flee the iron-shod and implacable advance of the Dwarfs.[1]

And Dwarfs are vengeful. Hands that once crafted the most intricate of jewels, minds that once delighted in the simplicity and timeless wonder of an exactly constructed stone pillar, now see only red ruin. Although matter-of-fact in their peaceful pursuits, once a Dwarf snaps, his whole life collapses like an arch with its keystone removed. The fury of a Dwarf overcome with a grudge-hatred is stark and harsh.[1]

They are unremitting in their violence, and forgiveness is not in their nature. Instead, they are grown cold, having no more mercy in them than granite. During such periods, even their allies - unless they be barbaric of nature, such as Sigmar in the days of old - will turn their eyes from the cataclysmic and all-consuming wrath that the Dwarfs unleash.[1]

In all but the richest of clans and holds, a Dwarf is expected to supply and maintain his own arms and armour. This is no issue, as most Dwarfs treat their gear of war as treasured family heirlooms, handing down axe and shield, hammer and mail coat, through the generations - presenting them to a young Dwarf when he comes of age. Some clans, such as the Goldshields or the Ironhammers, have developed their conventional gear of war to ensure that their regiments are bold and uniform, while others show their allegiances through more subtle colours or symbols.[1]