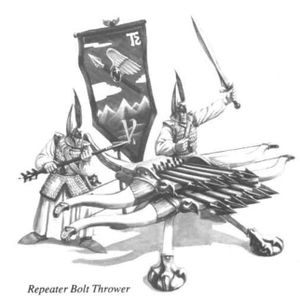 The Eagle's Claw Repeater Bolt Thrower is a powerful war machine used by the High Elves. [1a]

Having developed powerful torsion war machines such as the Eagle's Claw, the Elves have never needed to use more unreliable gunpowder based technology. [1a] Sturdy, durable and portable, it is used on land, on ships and as part of the defences of fortifications and often carried into battle by the Lothern Sea Guard. [2a]

The Eagle's Claw has been used by the Elves since the days of Aenarion and has always been effective. [4a]

The Eagle's Claw fires long steel tipped bolts or arrows the length of elf [4a], and is able to fire them either one at a time or as a volley, although the accuracy of the latter is diminished. [1a] While it may not be as dramatic or have the same destructive potential as gunpowder based weapons, its relentless accuracy, efficiency, and reliability makes it incredibly dangerous. [4a]