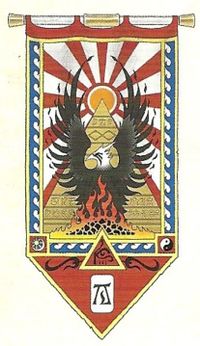 Eataine is one of the inner kingdoms of Ulthuan. [1a] It is pronounced Ay-a-tain. [2a]

The kingdom is one of the wealthiest and most militarily stable of all the Elf realms.

It is centered around the Emerald Gate and and its capital city, Lothern, also serves as the capital city of Ulthuan. [1a]

Much of the kingdom is composed of summer etates, villas and vineyards. [2a]

In 2399 IC, a fleet of Skaven submarines arrived on the shore of the kingdom, disgorging a horde of ratmen who were met by the spears of the Lothern Sea Guard, killing six waves of the skavenslaves unleashed against them. However this was all as the Skaven Warlord Skizratch had planned and only then did he release his Rat Ogres and Warpfire Throwers against them. The Sea Guard held firm and even slew Skizratch but the skaven seemed unrelenting. It was then that Caradryan and his Phoenix Guard arrived to turn the tide, followed by more Sea Guard. No skaven would escape the beach. [3b]

Eataine is home to tens of thousands of elves and is a vibrant center of international sea trade. [2a]

The Sea Dragon Amanar is often portrayed in the heraldry of the city and its ships and it is said the dragon stil sleeps beneath the Emerald Gate, ready to rise up at a time of its direst need. [1b]

When the armies of Ulthuan make war it is often the ships of Lothern that carry them and any beachheads are siezed by the Sea Guard. [1b] It is guarded by 10,000 Lothern Sea Guard and has numerous formidable defences.

The Silver Helms of the kingdom have lances carved from the trees of the Eternal Grove which do not break in battle. [1a]