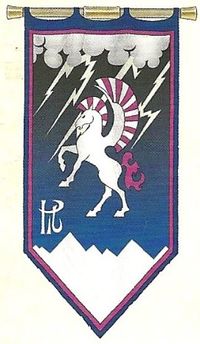 The province of Ellyrion is a land of rolling hills and grasslands, and produce the some of finest horses and riders in Ulthuan. [1a]

Great herds of horses roam the sweeping grassy plains, touched by the inherent magic of the land. [2a]

The elves of Ellyrion learn to ride as soon as they can walk and are the most accomplished horsemen in all of Ulthuan, and indeed much of the world. They also have a reputation for being hot tempered, especially if they or their horses have been insulted. Each Ellyrian child is bonded to a horse at a young age and if they go to war, they will guard each others lives with their own. [1a]

Although protected by the fortresses of the Annulii Mountains, Dark Elves often seek to steal night black horses from this kingdom, killing those of other colours so Ellyrians constantly patorl the steppes watching for intruders. The shields and banners of the kingdom are filled with images of horses, pegasi and other creatures of their homeland, celebrating legends when Elves and horses defeated enemies.[1a][2a] Soldiers of Tor Elyr often carry weapons crafted from Nightelm wood which resists dark magic, although during the Great Incursion, Malekith ordered the woods burnt down so that they could no longer craft such weapons, so these may be the last wielded. [1a]

The land is famed for its mild winters and gentle summers. [2a]