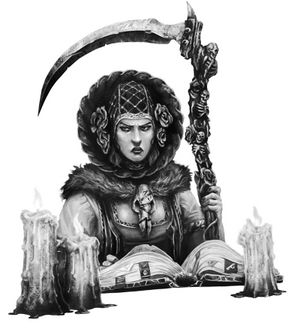 Elspeth von Draken is a Magisterix of the Amethyst Order, also known as the Dark Lady of Nuln and the Graveyard Rose. [1]

She has been associated with Nuln for three generations [1e]

She is a strong ally of Nuln and the current Elector, Countess Emmanuelle von Liebewitz but the Supreme Patriarch, Thyrus Gormann regarded her independence as a liability and resented both her enigmatic manners and great power, [2a] as does his successor, Balthasar Gelt. [1e]

She does not take on apprentices. [2a]

Her family have long been touched by the winds of magic for good and ill and she herself has become one of the most powerful Amethyst mages of the age. [1e] [2a]

She had little time or interest in the politics of her order or any other, remaining fiercely independent. However she does travel widely, collecting and experimenting with many arcane devices and artefacts and has a substantial storehouse of such treasures. When at Nuln, she inhabits a tall black tower on the edge of the gardens of Morr but maintains another similar tower in the Grey Mountains. [1e] [2a]

She maintains links with both the court of the city and also the temple of Morr which also helps protects her from interference from her college and the agents of Balthasar Gelt who sees her as potential threat to his own power. Elspeth will also seek out enemies of the Empire and has dealt with not only the Mire Hulk Rawbones but also the vampire, Vashara of Lahmia. [1e] [2a]

A few Witch Hunters have challenged her, even attempting to storm one of her towers - all have been repulsed and none have ever been able to speak of anything that they have learned. [1e]

As the horde of Tamurkhan approached the city, she appeared at the court of Countess Emmanuelle von Liebewitz, declaring that the dead had spoken to her of the danger and she had discovered much about it with the aid of her Carmine Dragon steed. [1a]

Before the battle began she gave Theodore Bruckner a special talisman that would not only ward him against danger, but also form part of her own master plan. Telling him to seek out the lord of the vast horde, she watched the initial stages of the conflict from a high perch on the cathedral spire, atop her dragon awaiting the right moment to strike. [1b]

As the Kurgan cavalry was being destroyed by the guns of Nuln and the magics of wizards of the college of Metal, she took to the field, tearing apart Orhbal Vipergut and the dragon he rode, letting them crash down into the increasingly dispirited Kurgan forces. She then unleashed not only her own dragon but her powerful magics on the tribesmen until the survivors broke and fled.[1c]

Finally Bruckner engaged the Maggot Lord himself and although he prevailed, cutting down the Chaos Champion of Nurgle, the fell creature unleashed his curse, beginning to take over the body of his slayer. However, Elspeth had planned for this and her talisman blazed with power consuming both of them completely, also breaking his magic which destroyed a vast area around it and slew her dragon, even as she faded away. [1d]

Following the battle, she was not seen in Nuln for several years but when she returned she had recovered her pale and youthful beauty.[1e]

She uses the Lore of Death and as a Loremaster is able to use any and all spells from that lore. [1e][1f] In addition she is so saturated with the magic that she can can become an insubstantial spectre at will. [2a]

In battle she carries her Pale Scythe, a magical weapon made more of shadow than steel, made by her and attuned to the magic of death. [1e]