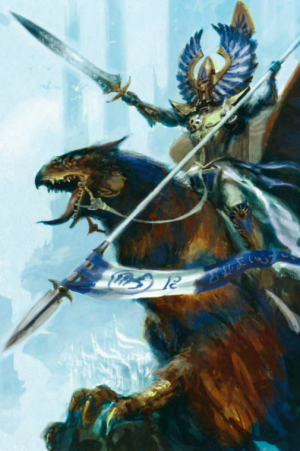 Eltharion the Grim, for a short time known as Eltharion the Blind, is a legendary General and hero of the High Elves. [3a]

Eltharion is a mighty High Elf Prince, and among the greatest of his kind.[3a]

Many times has he achieved what would have been thought impossible. It was Eltharion who was the first of Ulthuan's generals to dare an assault on Naggarond itself and live to speak of it, and he who finally brought about the defeat of Waaagh! Grom. For his valour in that battle, Eltharion was elected Warden of Tor Yvresse and, though he is a dour ruler, the people of that fair city love him dearly. Eltharion's early rule was split equally between scouring greenskins from the land, and overseeing repairs to Yvresse's network of waystones.

In the first task, Eltharion was aided by the nobles of his realm, who rallied to his banner with an enthusiasm not seen for many long generations. In the second, he sought the assistance of the Loremaster Belannaer. Though Eltharion had successfully stabilised the waystone of Tor Yvresse, he felt that luck had guided his hand rather more than judgement in that task, and he did not wish to see ill-fortune or rashness on his part destroy Ulthuan. With his realm thus secured, Eltharion took his blade overseas; not to the chill shores of Naggaroth in the west, but east to the lands of the Old World and beyond. Yvresse had but barely endured the onset of one Waaagh!, and Eltharion swore that no other would reach Ulthuan's shores. Atop his Griffon, Stormwing, Eltharion swept through the Badlands like a wind of blades.

He slaughtered Warbosses and ran their armies to ruin. He toppled Orc fortresses that had survived earthquakes, Bretonnian crusades and the vengeance of the Dwarfs. Yet, miraculously, there always seemed more greenskins for him to fight. Finally, Eltharion learned the truth. His reputation had spread so far and wide that Warbosses were actually seeking his army, knowing that the "Pointy-'ead" would "give 'em a proper fight." This revelation ended Eltharion's battles in the Badlands. He now knew that to continue would not abate the greenskin threat. Returning to Yvresse, Eltharion began to train its armies and fortify its cities as never before. The next time a Waaagh! made landfall on the shores of Ulthuan, the folk of Yvresse — and their grim Warden — would be ready for them.

In the 260th year of the reign of the current Phoenix King, Finubar the Seafarer, Eltharion became the first High Elf ever to lead a successful raid against Naggarond and return alive. [3a] The High Elf army was small but Eltharion force marched his followers through the bleak landscape of Naggaroth. He took many Dark Elf garrisons by surprise and razed them to the ground. On his Griffon, Stormwing, Eltharion himself rode down those that fled, and ensured that not one Dark Elf escaped to send word to the Witch King. Thousands of Dark Elf warriors were cut down by the disciplined High Elf Spear regiments who advanced across the landscape. Patrols of Ellyrian Reavers worked in concert with Shadow Warrior bands, ambushing enemy messengers and sowing terror and confusion deep into Dark Elf territory.

When at last Eltharion's army reached Naggarond, the boldest Elves clad themselves in captured garb and entered the city, opening the gates from within. The waiting High Elves poured into the city and ran riot, burning buildings and slaying all they found. It was as they prepared to fall back that disaster struck and Eltharion was wounded by the blade of a Witch Elf. He struck back beheading his attacker, but the damage was done — the envenomed sword had left its poison in his blood. The raid had been a success and the High Elf force escaped to Ulthuan with minimal losses, but by the time they docked at Chrace, Eltharion was near death. The night of their return, the High Elves pitched camp near the shore, for the journey had been arduous. None amongst them had the skill to counter the Dark Elf venom, and it was with heavy hearts that Eltharion's most trusted lieutenants laid him in his tent, knowing he would be dead by morning.

During the night. Eltharion stirred from his fevered sleep. Opening his eyes dreamily he saw a pale apparition, and with horror realised that the ghostly form was none other than his father Moranion. The shadowy figure was bloodied and mangled by blade-marks and arrows, and Eltharion knew his father was dead. The spirit spoke in hollow tones, telling him that their ancestral home of Athel Tamarha had been destroyed and its lands defiled. He warned his son that the Goblin Warlord Grom was abroad in Ulthuan. A terrible foe, with a shaman of frightful power at his command, Groat and his vast army of Goblins was overwhelming all in his path.

In their ignorance they had defiled every watchstone between Athel Tamarha and Tor Yvresse. The magical energies they normally contained were wracking the land and the Phoenix King's armies were too far away to act. If the watchstone of Tor Yvresse were to fall too, then devastation on a scale not seen since the Sundering would be unleashed. When Eltharion fully awoke, miraculously cured of the Dark Elf poison, the ghost was gone, but looking down he saw the Fangsword, ancient heirloom of his family, resting where his father's spirit had been. He knew his destiny was to avenge his father and his home. He arose from his bed and grasped the sword, feeling new strength flow into him as he lifted it.

The Battle of Tor Yvresse

In the morning the astounded High Elf commanders found their Lord awake and alert, pale and wan but strong. His face was dark as he told them of his vision and his quest. He bade them return to their ships. With all the speed they could muster they sailed for Yvresse. Upon arrival they found the great city in flames, Goblins and Ores, led by Groin raged through the streets. Outnumbered regiments of High Elves bravely fended off hordes of Goblins. No matter how hard they fought though, they were losing, street by street, every Goblin that fell was instantly replaced, while the outnumbered Elves had no reinforcements. Above the blazing buildings, the Goblin shaman flew upon a great Wyvem, blasting the city with foul magic. [2b]

As his ship drew into the harbour, Eltharion briefed his warriors. Victory lay in securing the Warden's Tower and the watchstone of Tor Yvresse. He entrusted his most loyal soldiers with this task and they swore to complete it. Before the first Eagle ship had reached the docks, Eltharion took to the back of his mighty Griffon Stormwing and soared high above Tor Yvresse. Hundreds of Elf warriors followed their master's example, and rushed ashore to join the fight. Far above, Eltharion charged directly at the Shaman, who saw him almost too late. Through strength of will alone, Eltharion deflected the lethal magic that the Shaman propelled at him, as Stormwing raked and clawed at the startled Wyvem. For long minutes the pair circled one another, the Shaman unleashing a hail of spells that bludgeoned the Elf lord and left him reeling. For a moment it looked as though the Goblin would prevail, and he prepared a final, deadly spell to finish off Eltharion, when suddenly he halted mid-spell. Eltharion's warriors had seized the Warden's Tower and made the Invocation of Ending - temporarily becalming the Winds of Magic. Seizing his chance, Eltharion attacked and took the Shaman's head off with a single stroke of his blade. [2b]

With that act the Greenskin attack faltered and Eltharion's veteran regiments swept the Goblins from the city. Grom first tried to rally his fleeing army, but after a moment's thought, shrugged and joined the fleeing masses. Eltharion did not stop to savour the victory but instead went with four of his bravest warriors to the Warden's Tower. There they wrestled with the power of the watchstone, seeking to stablise the vortex. Nobody knows what took place in there, but in the morning, only Eltharion emerged alive, his face more grim than ever. The following morning not even the sunrise nor the cheering crowds of the victorious High Elves could force a smile from him. He was elected Warden of Tor Yvresse in recognition of his feats but from then on the haunted hero known as Eltharion the Grim [2b]

Later Eltharion fought in the defence of Anlec, though he was defeated and captured by the Witch King, who tortured and eventually blinded the noble elf. Malekith sent the crippled elf back to Ulthuan and the Phoenix King as an example of Malekith's cruelty and hatred of the High Elves.[4b]

Despite being blind, Eltharion became one of the best fighters in Ulthuan, having been trained by the Sword Masters. Using touch, smell and hearing he bested every elf he comes across even being able to outmatch Belannaer.[4a] The Sword Masters' teachings imparted all their vast martial skill to Eltharion, but sadly none of their enlightened perspective. While most High Elves pitied and looked down upon their Druchii "cousins", Eltharion embraced his hatred of them, to a degree that worried the masters of the White Tower to no end.

The warrior fought against the deadly Dark Elf Assassin, Shadowblade using all his newfound skill he was able to survive the encounter.

At some point Eltharion miraculously regained his sight, no longer blind and now even deadlier than before thanks to the Swordmaster's teachings. He reclaimed his old title and continued to lead the armies of Yvresse into war.

He fought at Ulthuan's defence during the during the End Times and lead an army into the heart of the Old World.[1]

In 2524 IC', Eltharion led an expedition of High Elves deep into Sylvania to try to rescue Aliathra the Everchild. Eltharion battled Mannfred von Carstein while Arkhan the Black was performing the ritual to reawaken Nagash. However, Arkhan eventually killed Eltharion using dark magic.[1]