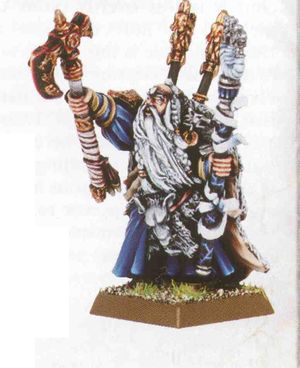 Ar-Ulric Emil Valgeir was the reigning High Priest of Ulric and one of the Electors of The Empire.

Aside from his role as High Priest, he is one of the electors who choose the emperor. Inevitably, he plays an important role in the religious tensions between Sigmarites and Ulricians, which are unfortunately fueled by fanatics on both sides - not least by Luthor Huss and his followers.

During the war against Archaon and the resulting Seige of Middenheim, Emil fought alongside his elite Teutogen Guard coming face to face with one of Archaon's Lieutenants, the mighty Haargroth. The two engaged in a viscious duel, with the Ar-Ulric eventually coming out victorious.

During the End Times he accompanied the Imperial forces after Kislev was overrun and almost entirely obliterated by the forces of Chaos. The northern border of the Empire became a major battleground, with Balthasar Gelt's construction of the Auric Bastion along the Empire's northern border the only thing holding back the Chaos hordes. At some point during this time Valgier was murdered by the The Changeling, a shape-shifting daemon. This daemon then masqueraded as Valgier, assassinating other important figures and sabotaging Imperial defense efforts. Ultimately, with his puppet Gelt, the daemon orchestrated an assassination attempt on the Emperor but was foiled and destroyed by Valten and Ludwig Schwarzhelm.

Emil was the leader of the Cult of Ulric and thus a mighty Warrior Priest, capable of slaying the mighty Chaos Champion, Haargroth in combat.

The Wolfplate Armour was a powerful artefact that made Emil immune to fire and highly resistant to magical attacks.

The Hammer-axe of Skoll was a weapon empowered by Ulric himself, it could greatly enhance the Ar-Ulric's strength.

Emil was blessed with the Favour of the Winter Wolf, Ar-Ulric's divinely granted powers were greater than any other priest of Ulric.