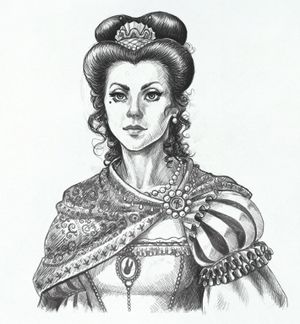 Lady Emmanuelle Nacht is a Diplomat of the Empire and Imperial Herald. [1]

She reads widely including biographies, natural philosophy, history and the stories of Gotrek and Felix [1a] as well as being a fastidious documentor and record keeper. [1b]

A tall and beautiful woman in her late thirties with a soft olive complexion, dark, tightly curled hair and piercing green eyes. She has incredible poise being able to emit calm, comforting signals to those she speaks to but remaining businesslike. Her clothes are of the latest fashion, but she does favour a green velvet cloak and brooch. [1b]

As the daughter of a Imperial diplomat, she was was raised in the palaces of Far Cathay becoming skilled in diplomacy, subterfuge and martial arts and has become a efficient and highly regarded councillor, finding favour in Altdorf. [1b]

Recently she was sent to Ubersreik as a Imperial Herald and is currently focused on the matter of preventing all out war in the town. [1b]