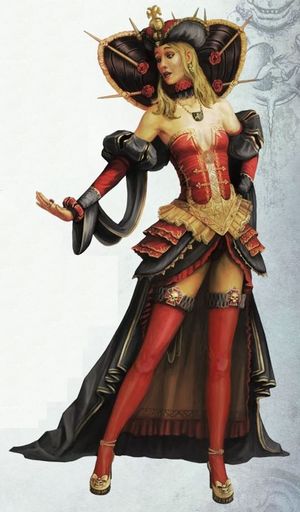 Emmanuelle von Liebwitz at the Opera

Emmanuelle von Liebwitz is the current Elector Countess of Wissenland[1][2][3],

Well known as the most eligible spinster of The Empire, she holds her court in the semi-independent city-state of Nuln, where she holds the titles of Lady Mayoress and Chancellor of the University of Nuln. She is also the Duchess of Meissen.[4]

Many consider her the most fashionable and one of the most beautiful, powerful women in the Empire, renowned for her outrageous parties, scandalous style of dress, and numerous romances, but she is also said to have a capricious nature, a ferocious temper, and unusually a disdain for politics. [6c]

Emmanuelle grew up with and became a childhood friend of the Emperor which has often been to her advantage. [6c]

She surpassed the wife of Maximilian von Konigswald, Elector Count of Ostland who had been the Empire's premier hostess. [7a]

As an Elector she travelled with Karl Franz and his son to the performance of Drachenfels at the Great Enchanters castle, taking a interest in the young Luitpold as a potential husband. [8a] At the dinner following their arrival she dazzled many with the twenty foot train of her dress, the 300 sapphires on her necklace and her plunging cloth-of-gold bodice with her only rival being the actress Lilli Nissen. The two women hated each other on sight. [8b]

Countess Emmanuelle has only contempt for what she terms po-faced burghers and is actively seeking to seperate her beloved Nuln from Wissenland, keeping her own Electorial vote and granting the Toppenheimer family a new one for Wissenland. [4]

She has her own Wizards, but they tend to get on her nerves and hence do not always accompany her, in a similar fashion she is seldom escorted by members of a Knightly Order as they tend to clank alot. [6b]

She is fluent in several languages (Classical, Merogen and Tilean), is a fine singer and a excellent musician playing the harpsicord, violin and virginal. [6c]

Emmanuelle is the bearer of the Wissenland Runefang, Dammaz Vengryn but seldom wears it outside official occasions and rides both horses and a Pegasus. [6c]