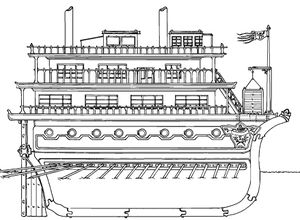 The Emperor Luitpold (River Boat) is one of a class of three large luxury river liners that plie the rivers of the Empire. [1a]

The Luitpold travels up and down the River Talabec between Altdorf and Berghafen near the World's Edge Mountains and is named for the father of Karl Franz. [1a]

The Luitpold has 8 luxury staterooms, 16 twin-berth cabins and 14 3-berth servants cabins. Fares cover the cost of the cabin as well as three meels a day. [1a]

Built by Spee boatyards of Altdorf in 2510 IC, the ship and its sister vessels gives the Hindelin Lines a fleet that is second to none. [1a]

The vessel is conisdered to be within the legal authorities of Altdorf itself and its laws regardless of its actual location. [1a]