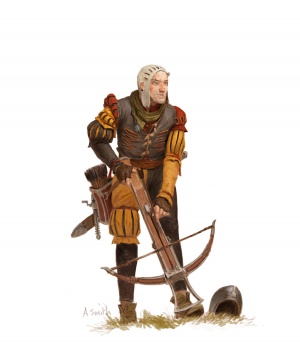 Crossbows are not popular weapons in the Empire, though Tilean mercenaries are often recruited to augment the firepower of an Elector Count's army. Some Counts from the southern provinces retain units of Crossbowmen as part of their personal household troops. Crossbows may lack the penetrative power of handguns, but are just as accurate in the hands of an expert. Crossbows do however have a longer range than handguns and are much more easily produced.[4]

Some states including Nuln favour Tliean over native born crossbowmen. [1a]