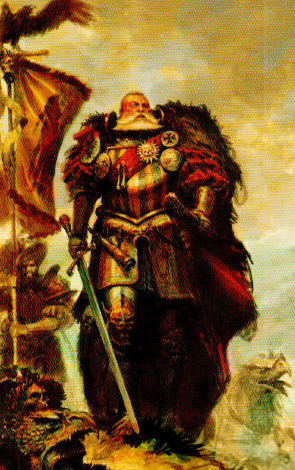 Amongst the highest commanding officers within an Imperial army, second only in command to an Elector Count or the Emperor himself.

To command an army requires the courage to send men to their deaths without doubt or hesitation. The armies of the Empire are led by those warriors, usually members of the Imperial nobility. Trained to direct their forces as a swordsman wields his blade. The castles of these generals are hung with banners from ancient times that were once borne into battle during the glorious days of their noble ancestors. Especially wealthy Imperial nobles may even own a banner that has been woven with powerful enchantments, and such works of magic are proudly carried into battle despite the poor reputation witchery has in the Empire in general.

The Empire has always been a dangerous land, and never more so than at the present time, with marauding Beastmen, Orc tribes and even rival Imperial nobles pillaging its towns and slaughtering its people, often with impunity. The Elector Counts must stand against such foes, though in practice it is not feasible for them to personally command every one of the forces that must be dispatched in their names. Command is often delegated to a trusted soldier considered to be an honourable leader of men, and this officer will lead the province's troops into battle. Of course, there are always exceptions to every rule and some of the more militant Counts, such as Valmir von Raukov of Ostland, have a great love for the clash of steel and the roar of the cannons. These leaders take to the field of battle whenever they can. Most of the men appointed by the Elector Count to lead their province's armies will also be nobles of the Empire, such as Aldebrand Ludenhof of Hochland, educated in martial pursuits from an early age -- hunting Beastmen in the Imperial forests, and engaging in falconry and swordsmanship.

Others, however, are commoners who have risen through the ranks as a result of their ability on the field, perhaps having first stood in the battle line themselves wielding a bloody halberd or greatsword. They are tested veterans with many years of experience in soldiering, having spent most of their lives practicing the arts of war in defence of their besieged homelands. Generals of the Empire are varied in the arms and armour they like to wield and wear; some make use of melee weapons, while others prefer ranged weapons like the longbow, crossbow, or firearms like the pistol. While most ride powerful warhorses into battle, some of the greatest nobles of the Empire who serve as generals for the Elector Counts ride Griffons like the Emperor himself or winged Imperial Pegasi into combat, their enchanted banners streaming out behind them in the wind. Such a spectacle is always an enormous morale booster for Imperial troops.